Back when Final Cut Pro was still a new NLE, there was very little out there in terms of tutorials and books. Steve Martin began working with the DV GUYs website developing QuickTime tutorials you could download, use and learn from. Many of those tutorials are still up on that website and Steve's own Ripple Training site. Point is, Steve has been at this for a long time as one of the leading teachers of all things Apple. It stands to reason that he would produce some incredible tutorials for the Motion program and he has.

Focusing on the integration of Motion and DVD Studio Pro, Steve takes you through the entire process of creating DVD menus in Motion, utilizing clips supplied with the tutorial, right on through bringing the Motion created menu into DVD Studio Pro, creating the buttons and activating them for your DVD project. No fuss, no bother, and no necessity of going through the tedious process of creating everything in Photoshop. Everything worked easily and seamlessly.

Steve's tutorial starts off with the basic setup of the Motion project itself, spending just the right amount of time on setting the proper project preferences before diving into the DVD Motion Menu creation itself. Within Motion he takes you from dragging the background picture frames from the Motion library, which will serve as drop shadowed surrounds for the Menu buttons themselves once easily integrated within DVD Studio Pro. It was a simply process to drag the frames to the canvas and then utilizing the keyboard shortcuts supplied in the tutorial, create a mask and two more buttons off the first one. Very simple. From there you move to create masks and scale each of the buttons to proper size before adding the drop shadows, graphic separation bars, color adjustment, text, behaviors and a clone overlay layer. This final Motion work is what will then be effortlessly integrated with your DVD SP project. 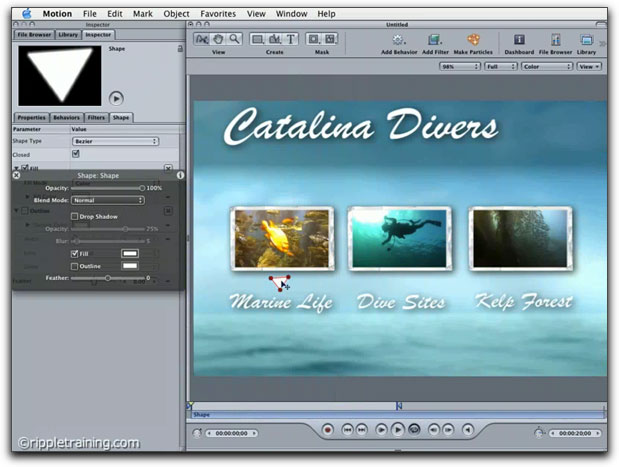 Creating the highlight-able buttons via simple use of the bezier tool you can, of course, make any shape you want.

The buttons have been created, duplicated and the Menu is now ready to be brought easily into DVD Studio Pro. 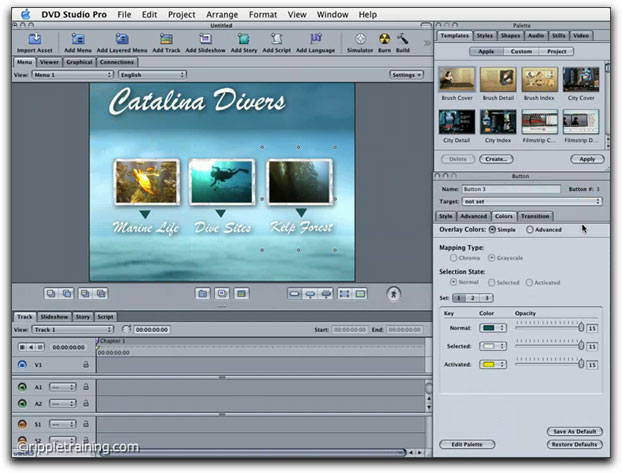 The Motion created menu has now been brought into DVD Studio Pro. We are ready to set up and activate the buttons.

Once things have all been exported and set up in DVD SP, Steve even guides you back to Motion to make certain changes, and then seamlessly brings you back to SP to further illustrate the very real ease of the entire process. This I did by going back to Final Cut Pro, exporting some of my own footage into the Motion buttons project, changing text and seeing how easily Motion updated these changes into DVD SP. 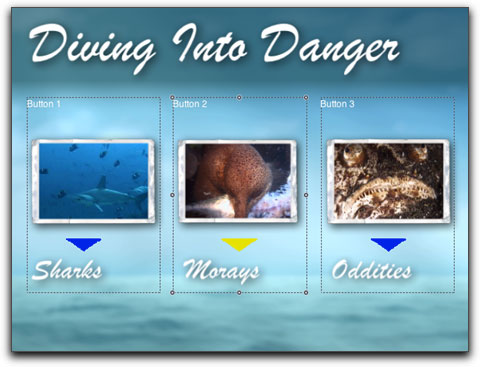 The Motion Buttons Tutorial is an easy to use QuickTime download; you can jump from segment to segment via the menu triangle on the lower right hand side. There are 36 separate segments in all, each, a next step in the tutorial process. The window is easily scalable to fit any size you feel comfortable working from. 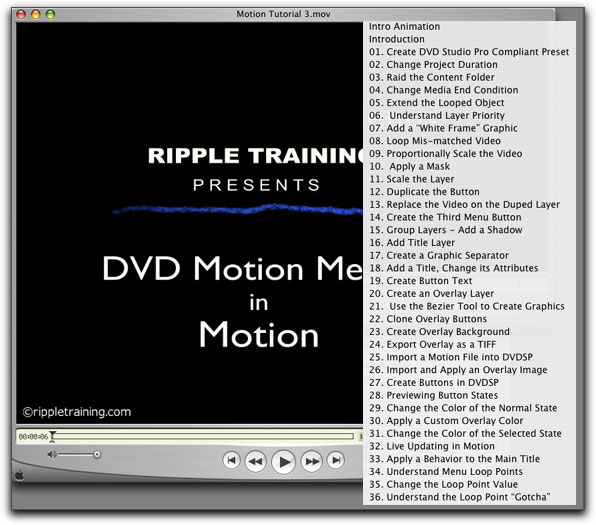 While this tutorial succeeds in its intended purpose, that of creating buttons in Motion to be used in DVD SP, it actually goes considerably further. The user is regularly provided with various keyboard shortcuts, workflow and helpful hints that generate good habits and awareness of the 'whys' of what you are doing. It is not enough that you can follow the directions of the tutorial; it is far more important in learning Motion, or any application, that you develop an understanding of how it works and why you are taking the steps you are. All learning is sequential, thus if you could not apply what you learn in this tutorial to other independent projects, you would gain little beyond its' initial scope. That point is moot however, as every step, every short cut and every explanation given serves a much wider purpose than the simple creation of buttons for DVD SP. The skills demonstrated are ones that form the basis for numerous future projects: they are useful, transferable and foundational. One thing Steve does, which I don't think I have seen before, is ask the person using the tutorial questions about the steps they are about to make. This interrogatory approach enables the user to think about what they are doing. This tutorial is more than creating a project where one simply follows directions without developing the clarity that should be gained. I would encourage more authors of similar tutorials to try this same strategy. The tutorial movie itself can be referred to as often as necessary to remember particular functions and skills, long after the first watching. Thus, it doubles as a kind of video manual.

This is Steve Martin's third Motion tutorial. I look forward to receiving any and all future Motion videos that he may produce. Each one is an excellent substitute for having him sitting beside you providing private lessons and at one-tenth the cost. Beautifully done, humorous in many areas and well worth the cost, you can't miss.

Steve Douglas has been an underwater videographer and contributor to numerous film festivals around the world. The winner of the 1999 Pacific Coast Underwater Film Competition and the 2003 IVIE competition, Steve has also worked on the feature film "The Deep Blue Sea", recently contributed footage to the Seaworld parks for their new Atlantis production, and is one of the principal organizers of the San Diego UnderSea Film Exhibition. Steve leads both African safari and underwater filming expeditions with upcoming filming excursions to Thailand, Costa Rica, Kenya and Bali. Feel free to contact him if you are interested in joining him on these trips.