While the most obvious change is the new revision number and the simple fact of its OS X compliance, there are a few nifty things that have changed under the hood of DVD Studio Pro. What you won't find, ironically, is a major facelift or significant reworking of the existing user interface. Minimum requirements are OS 9.2.2 for the OS 9 install, or OS 10.1.3 or better for the OS X installation. Both versions are feature-identical.

DVDSP 1.5 looks and works very much like DVDSP 1.0, 1.1, and 1.2 - blissfully, you only need add a few tiny tidbits of new information to your existing DVD Studio Pro authoring skills. And unlike some software vendors who insist on throwing away our hard-won application skills like so many leftover napkins, Apple has kept the user interface and command menu placement virtually identical, even in the OS X compliant version of the application.

DVD Studio Pro 1.5 sports the now-traditional red yellow and green interface buttons in the OS X version, but retains the same multi-window environment as its previous versions, and the same easy-to-use design. 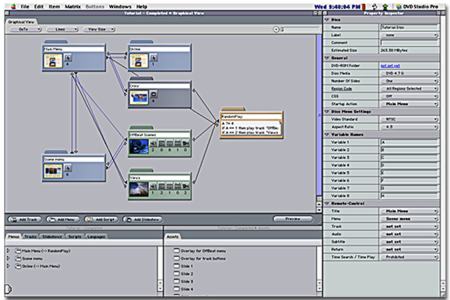 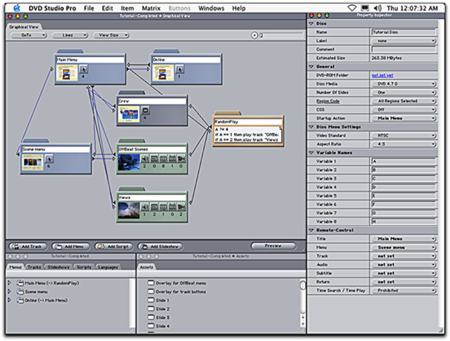 New items added into the 1.5 Version, however, should be of interest to those who create DVD Hybrid discs (DVD Video plus ROM-readable data on the same discs). While V 1.0-1.2 had a hidden feature that allowed the contents of a folder named DVD-ROM to be included in the final burned disc or written DLT master (if that folder was included in the final folder selected for DVDSP to "build" into (see Figure 2, below), this was sometimes problematic, as the contents of the ROM folder were not factored into the final totaled Disc Size; under some circumstances, this might have created a DVD that exceeded the allowable maximum size of 4,699,979,776 Bytes. 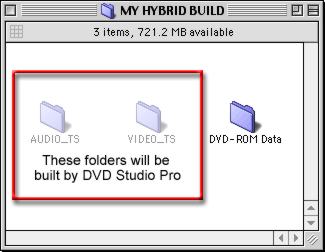 DVD Studio Pro 1.5 has added a feature that allows you to specify a folder that contains the ROM data you wish to include in the DVD-ROM portion of your disc, and also tracks the location and size of the contents. This make creating a DVD Hybrid disc a far easier task, and should eliminate any misfires on disc size. You select the desired folder easily, by clicking on the blue underlined folder link (labeled "Tutorial" in Fig 3), and navigating to your ROM data folder. That's all there is to it! 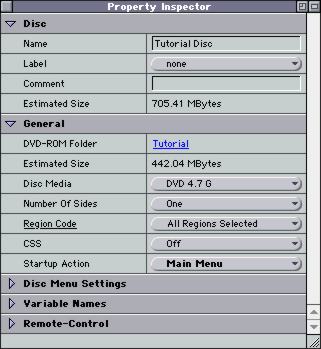 Best of all, one of the really annoying issues in setting Chapter Markers has been remedied - In previous versions of the QuickTime MPEG2 Encoder, the Interval between Markers (technically known as the GOP length) was set at a fixed 15 frame size during encode. While fine for most purposes, occasionally this would limit the precise location where a chapter mark could be set, and could sometimes compromise the encoding of scenes that change dramatically in color, brightness, movement, etc. To allow for more precise setting of Chapters in the revised DVDSP, the QuickTIme MPEG Encoder has been given the capabilities of forcing the so-called I-Frame Headers required to properly define a Chapter (Marker) location, based on instructions contained within Text Tracks in the QuickTime movie being encoded.

This can now be accomplished in Final Cut Pro V 3.0.2, while the DVD's video content is being prepared, and these chapters can be set frame-accurately PRIOR to encoding into MPEG. Best of all, when the Encode shows up as an MPEG asset in DVDSP, the chapters have already been set, and are instantly available for authoring. 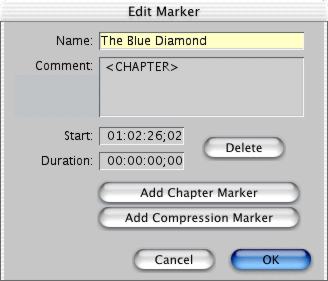 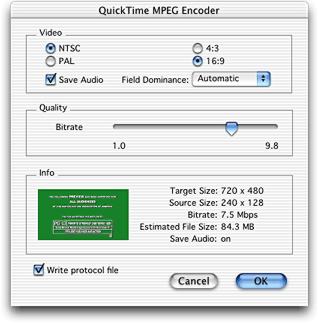 Fig. 5 - The new QuickTime OS X Encoder dialog box - note nothing has changed but the "Aqua" look (well, that and the rather weird 240 x 128 source size of this Widescreen movie!)

While the QuickTime Encoder looks identical (except for the new cool Aqua look in the OS X installation), there are some interesting developments INSIDE the encoder. According to a recent Internet post from Tony Knight, Product Marketing Manager for DVD Studio Pro:

"The MPEG2 encoder included in DVD Studio Pro 1.5 is improved over previous versions. The encoder is a bit faster, and it now uses prefiltering prior to encoding the content. This improves macro blocking, and you will end up with better visual quality, especially at lower bit rates compared to previous versions."

This is in addition to improvements made in QuickTime 5, including the improved DV Codec. While not an overt change, every improvement to the inner workings of the encoder brings us better MPEG files for the DVDs we are creating.

You may also find that the previous "loose" tolerance in DVD Studio Pro for encoding quirks (timing errors, etc) may have been tightened up. We've noticed that certain MPEG files that were previously acceptable for authoring in DVDSP 1.2 in OS 9, still work fine in DVDSP 1.5 in OS 9, but are not usable in OS X.

Regarding the new 1.5 version of Subtitle Editor, Tony Knight continues:

Some things are still the same, however...

The Format dialog is still the same, but one interesting thing has been added - note that the DVD-R dialog for the Pioneer Superdrive now has a check box for Lossless Linking (aka Burn proof).

Here's what Apple's "What's New in DVDSP 1,5" has to say about "Lossless Linking":

A new option in the Format Disc dialog lets you turn on the "lossless linking" feature of DVD recorders that offer this feature. Lossless linking is a technology that allows a disc to be burned successfully even if the flow of data to the recorder is interrupted during burning. This is ideal for slower computers, which have greater risk of another process interrupting the burn.
However, there is a slight possibility that discs burned with lossless linking may not play correctly in a small number of DVD players. If you can burn reliably without lossless linking, you should leave it turned off.

This feature is available also in the new Superdrive DVR-104 (also Pioneer A04). You will also notice that DVDSP is quite happy to have both an internal (ATA) and an external (Firewire) Superdrive attached! 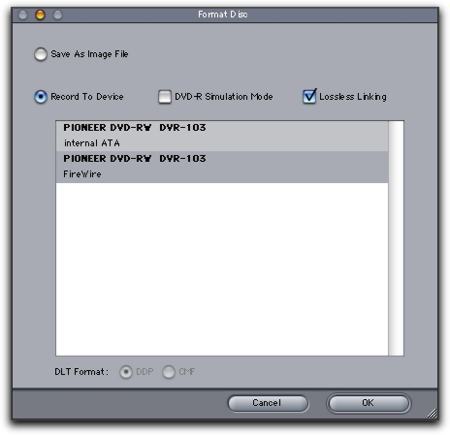 Fig 6 - New Lossless Linking function in the Format Dialog (note both Internal and External (firewire) Superdrives available on this system!)

What hasn't changed is DVD Studio Pro's compatibility with third-party MPEG encodes, as well as its ability to output to DVD-R (G) or (A) [you'll need the Pioneer DVR-S201 to write (A) media], DVD-RAM and DLT.

Summary?
All in all, still quite a bundle for $999 list, or $199 upgrade. Interoperability with Final Cut Pro to set chapters is a good harbinger of things to come in future editions of both (better upgrade to OS X soon, though - rumor has it that FCP 3.0.2 is the last version that will run under OS 9).

Things yet to come?
QuickTime 6 holds the promise of many cool new things, none more exciting than MPEG2 native playback!

Bruce Nazarian, MPSE is an alumnus of Wayne State University, where he began his long teaching career. Since then, he has been involved in creating synergy between computers and the media arts.
A well-known DVD instructor and consultant, he is a self-confessed technology junkie - His company, Gnome Digital Media, is heavily involved in DVD creation and Production, as well as DVD evangelism on a large scale.
He is the author of The DVD Companion, and Webmaster of his DVD information site Recipe4DVD