It is the day before NAB and in the midst of all the anticipation of new product introductions, several developers already have released updates to earlier products, and one new you-gotta-have-it expansion of an earlier product has reached market.

The CGM Volume 1 filters and transitions were so good that Apple licensed them. Not willing to rest on his accomplishments, CGM developer Klaus Eiperle followed shortly afterwards with CGM Volume 2. You can read my earlier review of the product on this site at above links. The Volume 2 update adds Final Cut Express support. This support not only provides Final Cut Express users additional transitions but also the image enhancement and special effects filters included in the package. Filters which have motion such as the Image Shatter filter now have automatic settings; this compensates for the lack of effects keyframing in Final Cut Express. Yet, I am left with a question; will users who spent $299 for an application spend an additional $174 for a plug-in package. I would hope so. The CGM filters help achieve a professional finish for any project and should be a part of the tool kit of any serious FCP or FCE editor.

Other features include a new Speed plug-in which accelerates video on a logarithmic-scale slider which also can be set for negative numbers to speed up a video in reverse. Basic 3D now has full alpha channel support. Pixel Storm has added an accelerate function while the Double Flip transition has enhanced edge quality when using the 3D shadow option.

CGM also demonstrates commitment to its user base by constant development and refinement of existing product and not charging for incremental updates which add features.

This is yet another product I had the opportunity to evaluate and share with readers. You can check out that earlier review at HERE

Effect Essentials began life primarily as an After Effects filter with some degree of Final Cut Pro support. Version 1.5 makes all filters FCP compatible with the exception of the color-correction curves: Super RGB Curves, HSV Curves, HSV Manipulator. But when used within After Effects, these useful advanced curves for precise color manipulation now display changes in real time as the points on the curve are dragged.

Version 1.5 also has increased rendering speed and some under the hood improvements. Once again, it is refreshing to have added functionality at no added cost to the user.

Twixtor remains the best product for speed ramping and motion retiming of any product currently on the market. It now supports all NLE and compositing applications. You may find my review of the initial release of version 1.0 at HERE.

One of Twixtor's greatest strengths is its ability to change frame rates of video, do pull downs, and process cleanly at the sub-pixel level. Unfortunately due to the limitations of FCP's architecture, frame rate changes are available only within After Effects, Combustion and Commotion.

Version 3.0 adds 16 bit processing even within the 8 bit environment of FCP. This essentially means cleaner frame interpolations and cleaner motion. Additionally, this update allows up to three foreground layers of video. The definition of foreground layers in Twixtor will become very apparent once you read the review of version 1.0 or browse the RevisionFX site. The most significant new feature in Twixtor 3.0, however, comes only in the Pro version and works only in After Effects, Shake and Combustion. Within these applications, as many as 12 tracking points can be added to give the plug-in more critical guides for motion estimation. Since Twixtor must, depending upon the operation, create or interpolate new frames, these tracking points result in more fluid motion.

Twixtor remains a high-end specialized plug-in. But if you need to perform speed change operations and wish the achieve the highest possible quality, there is no substitute.

Digital Anarchy first ventured into the world of text effects with a three plug-in package entitled Elements of Anarchy. Since we know in the production world that the fastest track to success consists of following the same track that others have taken (sorry for the sardonic note. It was very cathartic and I'm feeling better now, thank you), everybody wanted to know how to do that cool text effect of The Matrix. Enter Elements of Anarchy with its Matrix filter and the package became an overnight success.

Text Anarchy 2 expands those original three filters to eight filters. This pre-NAB release of a product actually intended to be announced at NAB works perfectly within After Effects and exhibits some early difficulties with FCP. The developer is aware of some potential problems with FCP and indicates that this will be fixed within a couple of weeks. It is on that basis that I commend this product. Anyone who works in text effects absolutely must have it.

After only two days of intermittently playing with the plug-ins, I am amazed at the number of controls that the plug-in provides and the complexity of effects that it can create. At $129, it represents a bargain, nay, a steal.

Let's take a quick look at each of the eight plug-ins. I would then encourage readers to download a demo copy since no brief print review could possible begin to detail all of the possibilities.

Cool Text does just what it implies. The filter allows creating a text motion like a wave, spiral or a other motion paths. Any number of parameters can be changed and those changes keyframed. Such parameters include size, opacity, color and even font. Most of the plug-ins allow font changes either by random, keyframe or parameter-driven options. Enter text or import a text file (most of the plug-ins allow import of text files) and then adjust motion path, color, size, leading, kerning, rotation it just goes on and on. The filter is aptly-named.

A color effect with random colorizing of each individual letter

There is nothing esoteric about the package. Cool is really cool and Font Changer really lets you change fonts. Think of the possibilities here. Imagine a word appearing throughout the duration of the clip in different fonts with those fonts either random or sequential, with different colors and opacities, and at different positions on the screen. Imagine doing this in one layer and one plug-in. That's font changer.

Well, the obvious-naming convention breaks down a bit here. Text Hacker allows converting one text string into another text string. You've seen it a million times already. Start with some nonsense characters and the letters keep changing until the target word is spelled out. Text Hacker allows virtually every possibility here. The letters can appear in order or they can appear random. You can morph from a pre-defined string to the target word or just let the computer generate random letters until the target word is spelled out. I see lots of uses here.

Here's an example about half-way through a transformation with the text composited over a moving track.

And here's a larger shot of just a simple transformation just about complete.

Sorry, FCP users, this on only works in After Effects since FCP does not deal with motion paths in the same manner as AE. Essentially, this will allow the text to follow a preset path with all of the possibilities of changing font, size, color and every other conceivable parameter.

Here's a part of a text following a path and changing colors during the duration of its movement.

This additional shot shows you the pre-set paths available. But only if you are working in After Effects.

Now we're back to something that sounds more like what it is. While FCP 3 does come with a Typewriter generator, this Type On filer takes things much further. There are slightly few parameters here. The font cannot be changed over the duration of the effect, but just about every parameter can be animated.

This is an example of another partially-completed effect with a leading cursor.

This filter creates text that seems to rain down, just like in The Matrix. Yet the filter also allows the text to follow a downward path. You can also create random text, colorize the letters and apply rotation to individual letters. This one is just too cool.

Text Grid can be used effectively to create a grid containing entered or randomized characters to fill a specific background. Think of it as an extension of the Text Matrix effect but with more parameters. A specific feature of this filter in After Effects only is its abilty to use AE Expression to define motion paths. 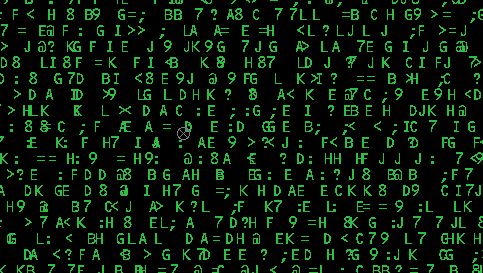 Screen Text is a simple scroll, but that scroll has the possibility of revealing itself in a type-on manner, of changing size and color as it scrolls or even of generating random characters during the scroll. Once again, consider the creative possibilities. 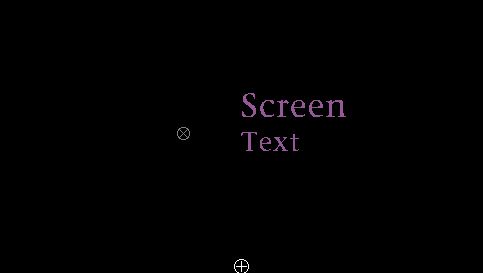 This screen shot does not look like much, but the parameter settings include a randomized color change as well as randomized type sizing. Think of this in a complex composite!

At first glance, Text Anarchy 2 represents an amazing collection of text effects with more possible adjustments than any creative professional would ever want. The documentation is remarkably extensive and well written. The plug-in is basic enough that a user can become productive immediately yet it possesses such multiple possibilities that it takes a few readings of the 68-page pdf manual which accompanies it.

This one is a must have.

That's all for now readers! More will be on the way after all the new announcements which NAB 2003 will no doubt bring.

[Top]
This article first appeared on lafcpug and is reprinted here with permission.
All screen captures, images, and textual references are the property and trademark of their creators/owners/publishers.