Do you work in After Effects, Final Cut Pro, Combustion, or Commotion? Do you need to change the speed of clips, or even just stretch a clip? Do you ever have the kind of day where you have 7 seconds of video but your edit list demands 8? How about the time you wanted to do a cool effect of variable speed within a clip? What about converting between multiple formats and frame rates (PAL, NTSC, film, interlaced video, progressive frame video)? If any or all of these situations have cropped up in your editing, then Re:Vision Effects has the plug-in for you.

Twixtor changes speeds and frame rates of clips by a process of interpolation and warping of frames from the original sequence. Re:Vision Effects claims that their technology enables calculation of motion down to the individual pixel level. The results are a pleasure to behold; the learning curve might be a little steep for those less familiar with the intricacies of time-remapping.

Let me note at the outset that Twixtor is an After Effects plug in and, even in Re:Vision's own words, it loses some functionalities and requires some work-arounds in other applications. Version 1.2 has just been released, which fixes an incompatibility with Final Cut Pro so now with the appropriate work-arounds, it integrates seemlessly with FCP. I was able to run it without a crash or even so much as an error message.

The most significant feature which works only in After Effects is that of changing frame input and output rates. If you need to convert, for example, from 24 fps to 29.97 fps, then you must work in After Effects. All other functions are supported by Final Cut Pro and any other application which accepts After Effects plug-ins.

In this brief overview of a small but powerful plug-in, I will focus on Final Cut Pro but the principles of its usage will apply equally to After Effects, Commotion and Combustion.

Re:Vision Effects could have done a little better job with their documentation. I am much more a visual person and could have understood the metaphor behind the program much better had I seen some screen shots or other more graphic tutorials. And, as one whose computer background is stronger than my motion graphics background, it took several readings of the documentation and much trial and error with the tutorial files before I found myself up and running. There do remain several parameters which continue to be unclear to me, but with experimentation with the plug-in I have begun to see differing results. And, to be fair, I attribute this just as much to the complexities of time warping clips as I do to sparce documentation. A motion-graphics person will immediately grasp the intricacies of Frame Interpolation and Motion Vectors.

Installing Twixtor is as easy as launching the installer, entering personalization and serial number and then dragging Twixtor from the Twixtor folder on your hard drive to the plug-ins folder of your host application(s). Then, apply it as you would apply any other filter.

Final Cut Pro requires several work-arounds in order for Twixtor to do its work, and you need to heed this carefully. First, in Sequence -> Settings -> Video Processing tab, select "Always Render in RGB." There are known issues with Final Cut Pro 1.2.5 and RGB versus YUV rendering, and these issues extend to a number of third party applications. Apple is aware. Next, under Sequence -> Render Qualities ->Edit Render Qualities, you must Uncheck Field Rendering, Draft Render and Frame Blending. Finally, if you are processing footage with fields, the Viewer Window must be set at 100% and Show As Square Pixels must be OFF. 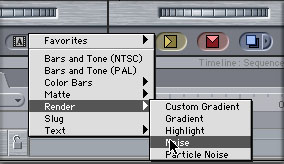 Now, here's the first concept in Twixtor that you need to understand. You can't just apply Twixtor to a clip and stretch its time. Since Twixtor is actually interpolating new frames, it requires a "place to put" all those frames. You thus need to create blank video which can draw the new frames and place this in an intermediate sequence which then will be dropped into another sequence.

Re:Vision recommends using the Noise generator to accomplish this. In our example, we wish to stretch a 1 second clip to 3 seconds. I create a sequence (which is simply titled Sequence 1) and generate a 3 second noise clip. I then apply Twixtor to the clip.

Double-click the clip to open it in the viewer window, click the filters tab (as you would do to alter the parameters of any filter applied in FCP) and notice the very bottom item contains a "well" for the Time Warp Layer. I drag the cat clip which I wish to stretch into this well and this becomes the layer which Twixtor will remap to the duration of the blank video (in After Effects, by the way, you would just create a new solid layer). Since this first example just involves stretching one seconds to three seconds, in the Stretching Method pulldown I merely set Constant Stretch and set the factor to 3.

Some complexities may arise in determining the best settings for the first two parameters, Frame Interpolation Method and Motion Vector Quality. The documentation explains the differences in the various settings, but for this example I chose to use a Blend (what you would use when in doubt) and the Best Vector quality just to test rendering times. Different video content (lots of motion, patterned objects, items with lots of detail, etc) might demand differing interpolation and vector qualities. Careful reading of the documentation as well as trial and error might be the only ways of determining which setting is best for the specific clip.

So, having set those parameters, it is time to render. And here's the answer to the question on all of your minds. On a Powerbook G4/400 mhz, stretching 1 seconds to 3 (or, to put it in other terms, slowing down the action by a third) at best quality required 7 minutes to render. The resulting video was smooth and very natural in appearance.

The next project I attempted was variable speed within a clip. Here again, I chose to stretch the one second clip to three seconds. But this time, I used the keyframe stretching method. This requires some calculation since FCP does not set the parameters automatically. Pull down Keyframe from the Stretching Method parameter. Twixtor will then ignore any Constant Stretching Factor which has been specified. Go to the beginning of the clip and in the Frame parameter, set a keyframe of 0. Go to the last frame of the original clip and set another keyframe, this time 30. This was an easy one to calculate since I have 1 second of video and I am working at the assumption of almost 30 fps. Even though we are "technically" at 29.97 fps, telling Twixtor that the clip ends at keyframe 30 is close enough and effectively does spell the end of the clip. Within that clip, I can set different keyframes and that is where the speed can vary. Since I am stretching 1 second to 3, if my motion is constant, then I would expect that at frame 30 of the "noise", my original clip should be at frame 10. If I set a higher or lower value in the Frame parameter, I can then alter the speed of the clip. LetŐs say I want to hold a position for a few frames. Then at frame 30 I might set a keyframe of 10. At frame 60 I might set another keyframe of 10. I have then held that action for 30 frames. If I really want to accelerate the action, at frame 70 I might want to set the final keyframe of 30. So, I have mapped 20 frames of original footage to 10 frames of new footage. You do the math. And the answer to the big question isÉ it required 8 minutes to render at Best quality.

These are but two examples of what you can do with Twixtor. It is a specialized plug-in that not every editor will require. The limited market as well as no doubt the extraordinary amount of programming required to create a plug in of such intricacy translates into an expensive item. But there is absolutely nothing else that will do with such precise control what Twixtor does, not After Effect's time-remapping function, not Boris Continuum and certainly not the very basic "Change Clip Speed" in Final Cut Pro.

It suffers from what I would consider weak documentation. And Final Cut Pro users will need to employ a few work-arounds necessitated by the issues which FCP has with many After Effects plug-ins. Still, Twixtor can be a valuable tool for editors requiring smooth and accurate time warping of clips. It's a real winner and it can make your videos real winners as well.