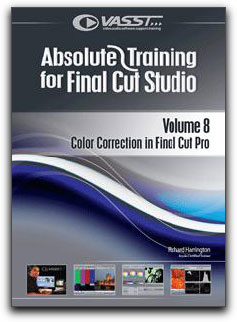 
Color Correction has always been my nemesis. It doesn't help that I have always been colorblind. I can blame my mother for that. I'll never forget the day that, as a boy, I went to a friend's house to see if he could come out and find what trouble we could get into. His mother answered the door and started laughing at me. Apparently, I was wearing a red pair of pants and an orange shirt and thought I matched perfectly. Never the less, I've gotten by and had friends double check any serious color correction I was doing. Fortunately, I've usually done a decent job and my errors haven't been too far off base.

On the high end of production, Colorists are a specialty breed among themselves; Color Correction is often their only job in post. Frequently however, most editors are on their own when color correction becomes necessary.

VASST, short for Video, Audio, Software Support Training, has recently produced a series of 10 training DVDS for Final Cut Studio. These can be purchased as a set or individually according to interest and need. I was interested in several but decided to focus on their Color Correction in Final Cut Pro DVD.

Taught by Richard Harrington, this disc runs three hours in length. It is intended for the intermediate to advanced Final Cut Pro user, though the novice in Final Cut Pro would have much to gain as well. However, be prepared to spend several sessions working with it as there is a whole milieu of material and examples to work through. It is best to transfer the disc's media files over to your hard drive prior to working on with the tutorial.

Once you are lead through initial settings reviewing proper hardware, studio set up and sequence settings, Richard Harrington then provides excellent guidance in understanding both the Vector scope and Waveform monitor in terms anyone can grasp. 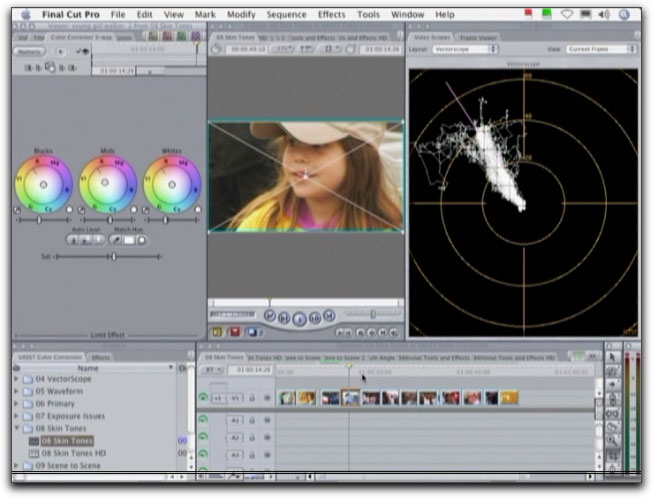 The monitors are there to help; here you learn just how to make the best use of them.

The remaining chapters focusing on both primary and secondary color correction, handling exposure issues, adjusting for skin tones, matching between shots, special effects and color grading belie the multitude of examples you are given to work with or the real world experience you will gain by sticking with this disc from beginning to end as I did. He doesn't just provide one or two examples of each problem to guide you through but presents numerous video clips of each, working both with you as you fix and improve on many of the supplied clips, and providing several more for you to practice with. 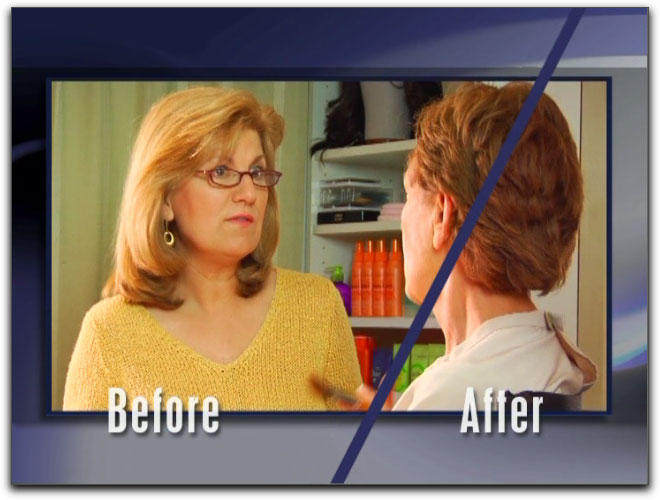 Frequent use of the Frame Viewer provided instant comparisons especially when the improvements are subtle.

When the 3-Way Color Corrector came out in Final Cut Pro for the first time, the 'Limit Effect' controls were displayed as were the rest of the parameters. In subsequent versions, one had to hit the tiny triangle at the bottom to get to those controls. Nicely hidden, I have met several who did not know they were even there, let alone know how to use them. Mr. Harrington makes prodigious use of these controls with almost every possible color or lighting problem.

Exposure problems can be a challenge for almost anyone.
Richard Harrington does a very commendable job teaching how to correct for them.

After repeating the steps so many times for the great many subject clips, you will not only gain a better understanding of what these parameter controls do, but will feel comfortable and confident in their use. The individual chapters use video clips sorted in separate sequences utilizing both standard and high definition and the individual challenges each format may present to the editor.

There are several sequences provided, each with its own media files to provide practice and guidance when dealing with color correction difficulties.

There were no glitches in either the audio or video on my copy of the DVD. My only complaint is that the video of the Color Corrector interface is no where near as sharp or detailed as it could be and as I have seen it on many other similar tutorials. I could still make things out well enough for even my old eyes but still see no reason for this lack of clarity. Perhaps a better compression codec would have dealt with this issue. Aside from image quality of the FCP interface, all video clips are just fine in their resolution and quality. 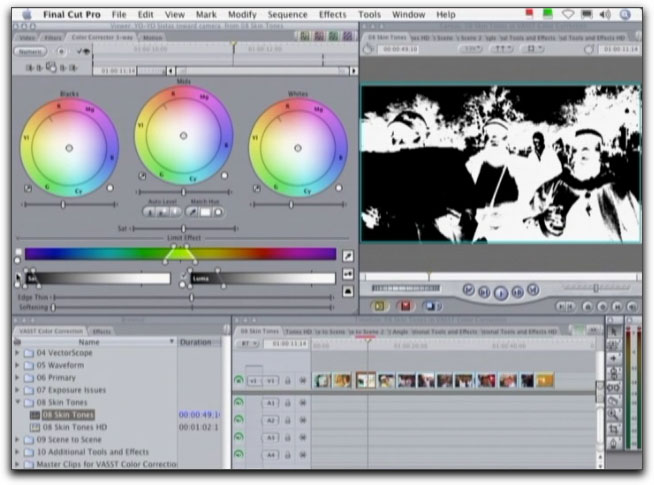 Learning how to correctly use the Limit Effect parameters in the 3 Way Color Corrector are essential
but a sharper view of the parameter controls on this DVD would be a big help.

There is, at the end of the disc, a bonus chapter on proper monitor calibration narrated by another VASST trainer. It is an area that can be essential to achieve proper coloration for any project. The narrator did a good job though he seemed to be a bit nervous facing the camera. But, you have to start somewhere and he did a commendable job in an easy to understand manner.

My bottom line on VASST's Vol. 8, Color Correction in Final Cut Pro, is that other than that one issue of interface clarity, this is the best tutorial on Color Correction I have yet to discover. It encourages you to keep busy practicing along with Mr. Harrington and on your own. I haven't found a book or other disc to better it yet!