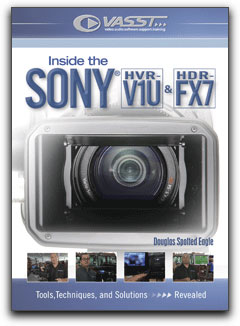 
New from VASST is this tutorial DVD for the most recent Sony Camcorders, the HVR V1-U and HDR FX-7. Both of these camcorders have been anxiously awaited as second-generation follow-ups to the now firmly entrenched Z1-U and FX-1. Would these new camcorders be improvements or compromises towards a middle ground? Not having either one myself, but seriously considering a purchase (since Sony does not seem to be interested in donating one), I thought it might be a good thing to take a long look before deciding which one should be in my belated Xmas stocking.

Narrated by Douglas Spotted Eagle, a well-known videographer, author and reviewer in his own right, this DVD comes in at a bit over 90 minutes and is separated into nine chapters covering most everything you might need and want to know about the Sony HVR V1-U. A completely thorough, though speedy, summary of all the V1-U's controls both on the camcorder body and within the menu is found in the Getting Started chapter. If he skipped any settings, I didn't notice it. 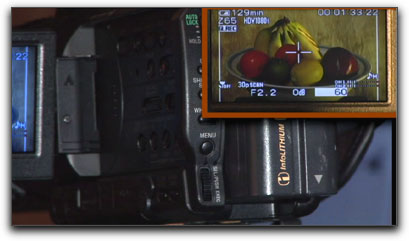 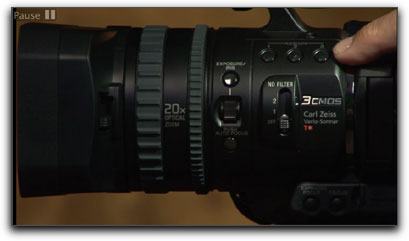 You will derive a most complete understanding of the controls and settings found within the HDR V1-U.
There are lots of close ups so which will enable you to see just what Douglas Spotted Eagle is talking about.

What would prove to be beneficial to someone new at shooting within the HDV format, or simply acquiring a new HDV cam they were not familiar with, are the many suggestions for settings as well as personal preferences that Mr. Spotted Eagle shares with his listeners. It is this personalized touch that makes this disc valuable.

A 1/2-hour introduction to the basics of HDV starts the disc off and really was quite interesting. From there you are lead into an introduction of the basic camcorder buttons and settings, how to manipulate the menu, audio and HDV, advanced features and functions as well as discussions covering both capturing HDV as well as output options. A few of Mr. Spotted Eagle's preferred techniques are also thrown in for good measure and serve to enhance this tutorial even further. 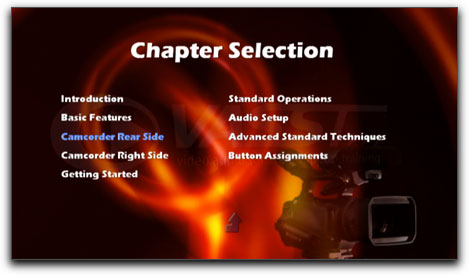 However, keep in mind that this disc also states that it focuses on the FX-7 as well, and for that, I can't quite say that it does or it doesn't. The V1-U is used for the entire length of the DVD and the FX-7 is not displayed once. It is also odd that it is never mentioned either. The only time you see any reference to the FX-7 is when a specific function on the V1-U is mentioned that is not applicable to the FX-7. At that time a text message will come up saying that the FX-7 does not have that feature. This if just fine, but there are many more differences between the two camcorders than are referred to in this tutorial. 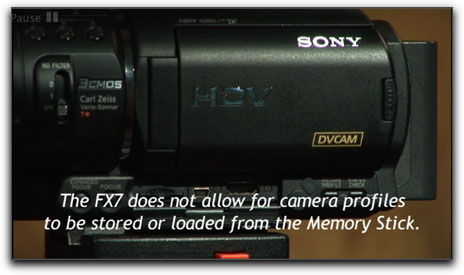 There are some messages that point out a few of the differences
between the HVR-V1-U and the HDR-FX-7. Not too many though.

The production of this disc is absolutely first rate. Both the video and audio quality are everything you would expect from VASST who have been producing tutorial discs, books and software for some time. The pacing is a bit quick and I frequently hit the rewind button to catch again what was said or pointed out, but this was not really a problematic hindrance to my getting thoroughly acquainted with the V1-U. Douglas Spotted Eagle is completely confident and amiable in his approach and keeps you busy following the various settings, points to consider and some of his own preferences, which should be welcome by any purchaser. 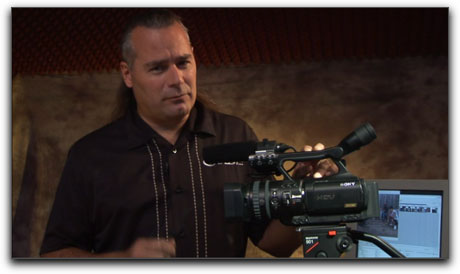 Your host for this tutorial, the well-known Douglas Spotted Eagle.

I really can't recommend this to the individual who is primarily interested in the HDR FX-7, though there is lots of carry over when using either camcorder. Thus, my bottom line is that if you are thinking of making a purchase of the HVR-V1U than viewing this disc is like taking a test ride to see if fulfills your needs, and expectations as well as your wallet. It is an excellent disc for those who have either already bought the V1-U or who are giving serious thought to its purchase.