Virtix Effects made its appearance back in the days of the original iMovie as one of the first packages to add effects to Apple's revolutionary free-but-consumer grade editor. The company has since expanded its offerings for iMovie and now moves into the more professional world of Final Cut Pro and After Effects.

I'll only consider the Final Cut Pro version for our purposes here.

Virtix Effects consists of 30 Video Filters which install normally into the FCP plug-ins folder. Download and installation are straightforward and those filters may then be applied to any clip and their effects keyframed.

Just merely reading the effect titles fills the user with anticipation that such a relatively inexpensive package can achieve so many effects.

But, alas, I must say that Virtix Effects just about lives up to these great expectations. The package contains a number of useful filters that would definitely augment the creative capabilities of FCP users yet many of the filters don't quite go far enough. I'll discuss several of the filters, comparing where appropriate other plug-in packages for FCP and noting the relative strengths and weaknesses of Virtix in relation to these other options.

Bubbles
This can really be cool. Every so often we all need that Lawrence Welk effect. Add a little "Champagne Music" under this clip of Zoser's Step Pyramid (2800 BC) and you'll have old Zoser's mummy tapping out "an' a one an' a two" This effect is one serious piece of fun. 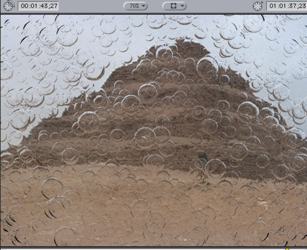 CrossEyed
Here is an example of a great effect that does not go quite far enough. The effect, in the words of the developer, "displays multiple overlaid copies of the image from left to right." It is a great effect which actually might work here in our scene of the Egyptian desert. Yet the overlaid images only shift along the horizontal plane. It would be much more useful to be able to control both horizontal and vertical movement. 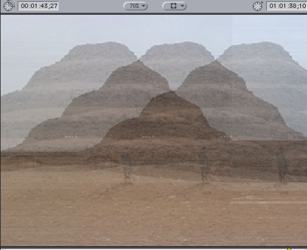 Dream Border
This one is pretty much a one-trick pony and simply places a white border around the edges of the image, with radius and gradation controls. Yes, it works and is a very effective filter. But I do feel that the CGM Volume 2 filter "Color Glow (8 point)" provides much greater control but masking the area essentially using a user-defined 8 point matte. Once again, it is good but others do the job a little better. 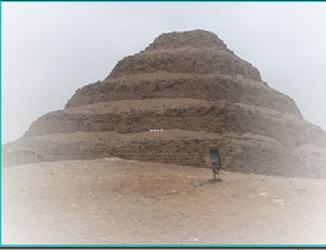 Edge Detector
What fun! This one turns the image into a sketch. It actually is easier to use and I think more effective than the Boris Cartooner included in the Boris Continuum Complete package. 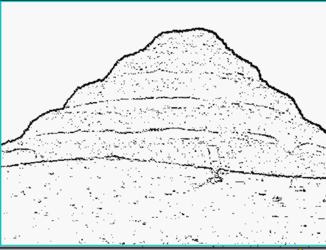 Stained Glass
And while we are talking about interesting visuals, Stained Glass allows creation of a mosaic tile or stained glass effect, also keyframable.

Funhouse
Another excellent distortion filter is Funhouse, creating the effect of those distortion mirrors in the county fair funhouse.

The filter with the greatest promise ­ Pixel Fixer
The Pixel Fixer has the most promise of any filter in the package. This would enable the interpolation of pixels surrounding either a dead pixel, a dust spot, or some other flaw in the image.

As you can see from these before and after screen shots, the comparatively large white spot has been removed and the pixels blended. Using the center point picker, the point to be interpolated can be selected and then sliders control the radius of the area to be blended. There were several problems here. First, the center picker would never center the box over the point I clicked in the Canvas window. The second issue is that the bounding box does not have coordinate or slider controls for top, bottom, left, right. It is only possible to adjust the dimensions of the square surrounding the selected area.

Several of the filters just don't make it at all.

The Witness Protection filter creates a spot to blur out a face "to protect the innocent" in these days of Dragnet reprise.

Of course, the same effect could be created by compositing the image on top of itself, applying a mask shape and then a blur-all from within FCP's native capabilities. Still, it is nice to have a filter which would perform that operation with one click. Yet this blur filter is not variable. One might want the effect of pixelizing the face rather than just blurring. There are simply not enough parameters.

Laser and Laser Point To Point
The laser filter shot a rather unnatural-looking laser. The Point to Point filter allowed better definition of the starting and ending points of the laser firing while the Laser filter was totally buggy. I was unable to set a starting point by clicking the position cross-hair in the Canvas window. The filter simply was reading the coordinates incorrectly. This is a shame, because laser and other lighting filters could potentially be useful.

"Laser and Laser Point To Point"

Likewise, the Lighting filter just shot a bolt of lighting. 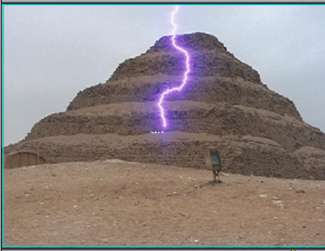 The documentation recommended using the Zap filter for more accurate placement of lighting. Much more detailed lightning effects can be obtained from the Final Effects Complete package, but that also carries a $700 price tag.

Other filters include Glint, to create a lens flare and Heat to create the illusion of heat rising up from the hot dessert sands.

The heat filter was particularly effective when applied to the Alpha channel and did give the illusion of moving waves of heat. Glint, however, was not particularly natural and gave little control over the shape of the flare. There are few packages that can actually approach the flare capability of Knoll Light Factory, however. Boris Continuum Complete contains both lens flare as well as moving light filters. Keep in mind, though, that the Virtix filters are part of a $125 package rather than a $600 package from Boris or $200 package from Knoll.

As an example of the difference between the less-expensive and more expensive package, compare the Rain filter from Virtix

with the Rain filter from Boris Continuum Complete.

Note the additional parameters that the Boris package provides.

with the Binoculars filter in CGM Volume 2.

Once again, the competing package is more comprehensive in its possibilities. And this CGM package is in the $100 price range.

There are some limitations to this Virtix package. It is essentially iMovie scaled-up to FCP yet still at iMovie level pricing. That means that it may not contain the precision or the flexibility that many FCP professionals might demand.

On the other hand, it contains a wide assortment of special effects not found together in any other single package. The effects are creative and can be used to great advantage in a number of possible editing scenarios. One must measure value based upon the pricing of filters which achieve comparable effects. Boris Continuum Complete is $600; Final Effects Complete, just released for FCP and OS X, is $700. The CGM Volume 2 filters contain some of the effects found within Virtix at its $100 price point, and where CGM duplicates Virtix, it does a much better job.

I would recommend the Virtix Effects package to editors on a budget who need cool effects and do not mind compromising greater control for greater economy. Final renders are good; the plug-ins are stable and do not cause FCP to crash. The variety of filters is extensive. In short, this is a very fine consumer package which professionals could also utilize to some advantage.

[Top]
This article first appeared on lafcpug and is reprinted here with permission.
All screen captures, images, and textual references are the property and trademark of their creators/owners/publishers.