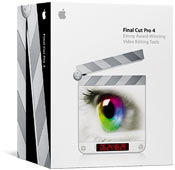 By now you are probably aware that Apple recently announced version 4 of its award winning non-linear editing software, Final Cut Pro. Not since version 1 was released in April of '99 has there been a more significant release. In the past, Final Cut Pro has had it's detractors mostly coming from producers and editors who thought that it was too "comsumery" to be taken seriously in the professionally marketplace.

With this version of the app, most of those complaints can finally be put to rest as Apple has truly listened to it's customer base and created pound-for-pound the most impressive feature set found in any editing application, let alone one costing under a thousand dollars. A few month's ago I compared Final Cut Pro to Final Cut Express and claimed that for the most part, they were the same app minus a few "pro" features. With this release they are not even in the same ballpark.

There is much to commend in this new product and I had difficulty deciding how to approach this review since Apple added over 300 new features to their software. So in view of the fact that most of the high profile features like unlimited real time playback through Firewire, customizable keyboard layouts, and real time audio mixing (to name a few) have been adequately covered on the Apple web site, I thought I might focus on some of the smaller improvements that in my opinion, makes Final Cut Pro 4 an important upgrade.

As a side note, for those of you wanting to see the new FCP 4 features in action, I recommend going to the Apple site and click on the Quick Tour button (http://www.apple.com/finalcutpro/quicktour/). Once there, you will be treated to almost 2 hours worth of tutorials that were written and voiced by myself and produced by Digital Film Tree in Hollywood. These tutorials cover FCP 4 as well as the new bundled apps like LiveType, SoundTrack, Cinematools, and Compressor.

If you do a lot of feature film cutting or dramatic story telling that involves heavy use of the trim window, there a few things that will make you want to do back flips. In the trim window, you can now set your multiple trim button up to 99 frames (that's eleven times as many frames you could trim in FCP 3). This useful because in many cases it is helpful to do a half second or even a full second trim without having to click the buttons or tap the keyboard repeatedly.

Another useful feature that has been added to the trim window is the ability to do dynamic trimming. With dynamic trimming enabled in the user preferences, you can now use your J & L keys to "rock and roll" over a cut point, then once you stop playback by tapping the K key, your edit point will automatically move to the new playhead location. You can toggle dynamic trimming on or off using the check box at the bottom of the window. 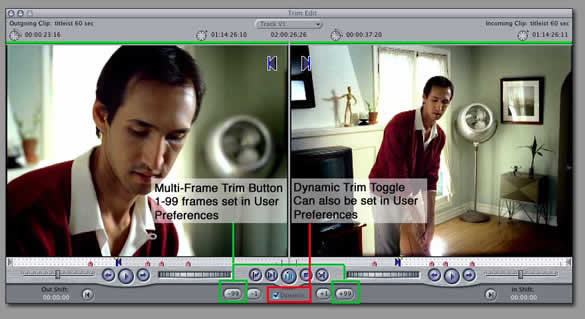 And what about assymetric trims? This is now a reality in FCP 4. For those of you who do a lot of multi-track dialog editing, this feature is incredibly useful because you can now Command-click with your ripple tool to select both the A side of your outgoing clip and the B side of your incoming audio clip. When you perform the trim, the B side of the clip is trimmed in the opposite direction as the A side, which effectively keeps everything in sync while giving you more flexibility in experimenting with various types of dialog edits.

You can also perform assymetric trims in the trim window as well as in the timeline directly. 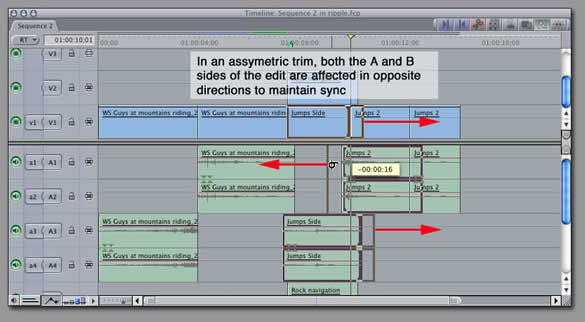 Dupe detection has been one of those features that film editors cannot live without because unlike video, every time they reuse a clip (or a portion of a clip) somewhere else in their timeline, it will cost them in additional dupe costs to physically cut that section into their film work prints. As you can see in this timeline, you FCP display vary-colored bars at the bottom of each clip where duplicated frames have been detected. 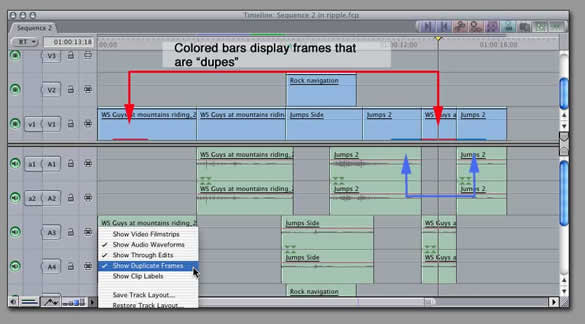 If you are a video editor, I still see value in this feature because up until now, there has been no quick way of determining whether you used a particular clip in your timeline and you want to make sure you aren't repeating a shot or a section of a shot.

Remember the days when you had to worry about time code breaks in your source footage? No longer. Final Cut Pro 4 now has an ingenious way of dealing with timecode breaks on souce tapes - it simply creates new clips on your hard drive with unbroken timecode . For example, by selecting "Make New Clip" you could capture an entire 60 minute tape with broken time code in three places, and FCP will automatically create three separate clips on your hard drive with frame accurate time code.

The Auto Render feature is a nice little addition to the app that takes care of rendering when you get up to go to the bathroom. You can specify which sequences actually get rendered when you step away as well as the interval before such renders will be commenced.

One of my favorite features has got to be the button bar. The button bar is frighteningly utilitarian in that it allows you to create a custom set of shortcuts for the myriad of commands in FCP 4 . Button Bars are found at the top of almost every major window and can be added by dragging from a button list or the keyboard layout window. You can even customize the look of the button bar by dragging the buttons into a different order, changing their color based on function, and saving the layout to your hard drive. 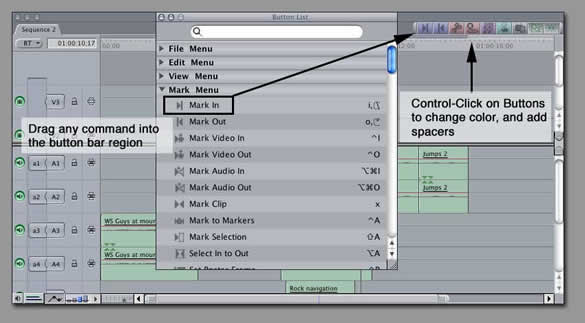 If you're like me, you appreciate FCP's built-in compositing features as a good work-horse that although not as robust as After Effects or Combustion, does enable you to get most of what you need out of it. Granted, I wish there were a few more compositing and animation tools, in this version, but I'm not complaining given sheer number of other improvements. And of course if you really want to do some serious compositing you can always use Shake.

One of the features they did add to the animation side of things is a new keyframe graph editor in the timeline. By clicking the clip keyframe button at the bottom of the timeline, you will get an expanded view of your audio and video tracks that now includes an area where you can view and manipulate motion and filter keyframes as a graph. 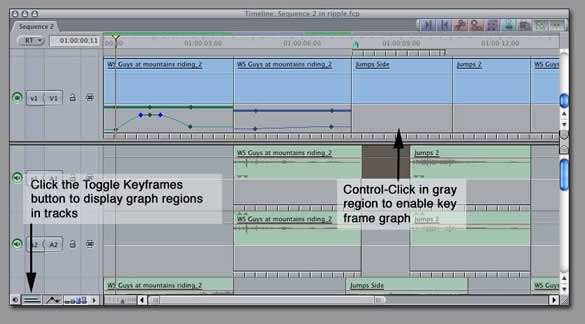 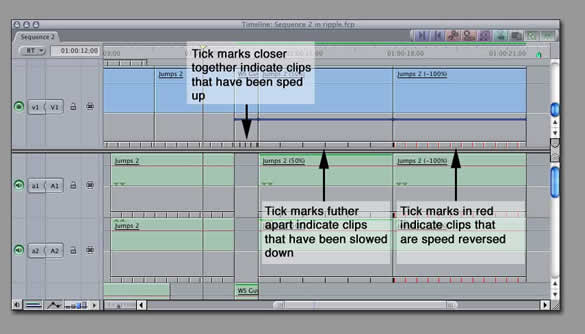 These tick marks are also extremely useful when doing variable speed changes - also known as time remapping because you can instantly see the areas in the clip that have been sped up, slowed down or reversed.

This feature has long been coming, and one I'm sure, that most of you will find valuable. The auto select contol allows you to select specific regions of your tracks using in and out points. The light blue area indicates the selection range on all tracks with the auto select control enabled. Toggling this control off for a given track deselects the range for that track effectively excluding it from common edit operations such as cut or ripple delete. If you use the add edit command (control-V) these buttons also control which tracks are "cut" by the playhead. This means control-V now works across all tracks or just selected ones. Hurray! 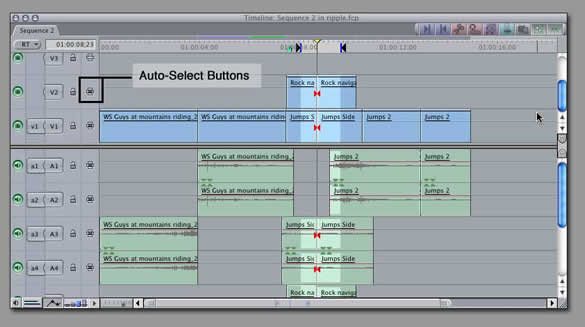 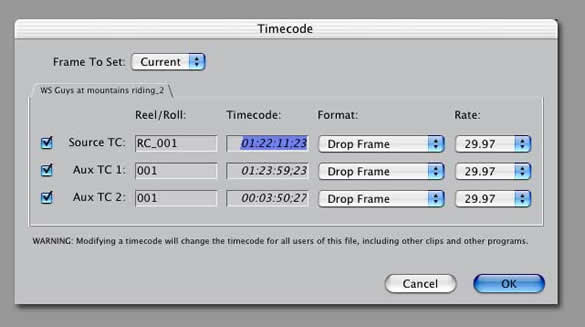 Doing scene-to-scene color correction has now been greatly enhanced by the inclusion of the Frame Viewer. The Frame Viewer is called up every time you use the Color Correction Layout and shows up in its own tab in the tool bench. It's primary purpose is to give you a side-by-side comparison of two shots in your timeline as a split screen. A pop-up menu on either side of the frame allows you to choose what clips you want to load into the Frame Viewer for comparision. You also can change the proportion of the split screen by dragging on the little green buttons at the bottom or top of the window. 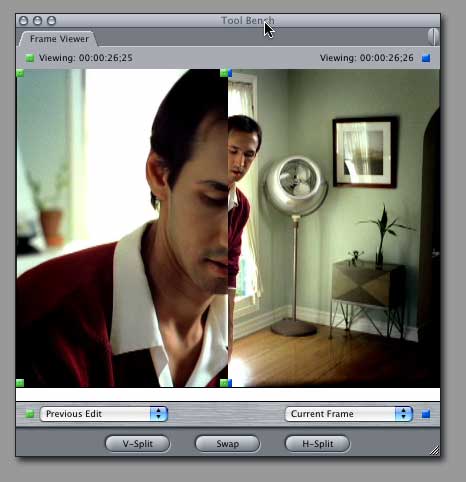 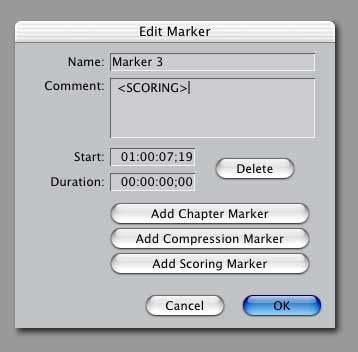 I know it's seems like a small thing, but the fact that my custom window arrangements now show up at the bottom of the window menu for quick access had me quite giddy. 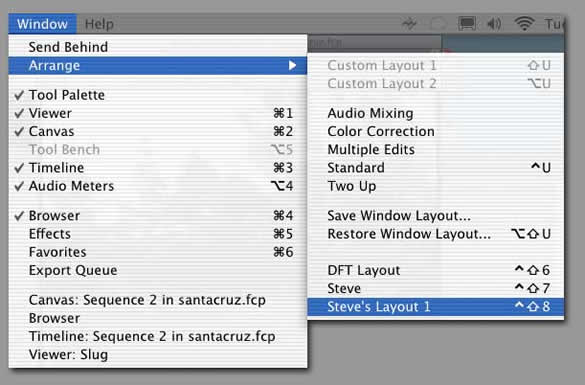 Another small thing, but necessary - the user ability to resize individual tracks by dragging on the line between tracks. By holding down the option key while dragging you can resize the video tracks independent of the audio tracks. And if you look closely, there is even a little button that will allow you to save your track layouts. 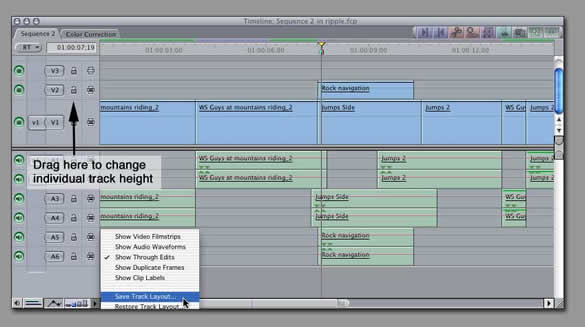 Match Frame back to Browser Clip

One feature that has been heavily requested is the ability to match frame back to the original browser clips. Just park your playhead over the clip in the timeline you wish to find in the Browser, then hit Shift-F on your keyboard and the browser bin that contains that clip now magically opens. Of course you can still do a normal match frame of your master clip to the Viewer by hitting the F key.

If you need to sync up dailies or other material that does not share a common time code source, you will love this feature. Just command-click on the items you wish to merge in the browser, then control click to pull up a contextual menu where you choose "merge clips". This dialog shows you the various ways you can choose to synchronize them. 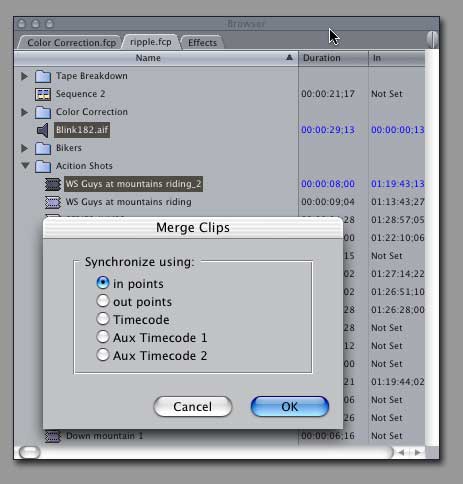 Ok, I'm going to stop here. There a many more features that I would love to talk about, but I'll leave that for future articles and tutorials. From this release it is clear that Apple has listened intently to their user base and created an editing powerhouse that will now find it's way into every area of professional post production. And considering that Apple has not raised the price of FCP 4, and has included four additional applications as well - Cinematools, LiveType, SoundTrack and Compressor - you shouldn't have to think too hard about whether you will be upgrading or not.

Final Cut Pro will be shipping in June with an upgrade price of $399.

Feel free to email me if you have any questions. steve@rippletraining.com

This article first appeared on Ripple Training and is reprinted here with permission.
All screen captures, images, and textual references are the property and trademark of their creators/owners/publishers.