My experince setting up FCP with the RTMac BOB

This is not a tutorial on how to use Final Cut Pro or the Matrox RTMac Realtime Card. This is only a short write up on how I had to figure my system in order to meet my requirements. Ken Stone mentioned that he thought others might benefit from seeing my setup and based on the feedback that I received from the FCP forums I believe that he may be correct.

If you review my requirements, at first you might think that this should be no problem and in fact it may even resemble your setup. However, please note that I only have 1 pair of external speakers and only 1 NTSC monitor. Given this setup, playing source material from either deck or the XL proved to be no problem but monitoring both A/V while editing within FCP gave me some trouble. The main problem was figuring out how to be able to monitor both A/V from clips that's I had captured from the VCR through the RTMac BOB. The clips that I captured via FireWire gave me no trouble at all.

I am one of those, "I've been using Macs forever" kind of people. You know the kind, "I don't need no stinking manual". So I spent countless hours plugging and unplugging cables. I figured hey, how many combinations could there be ? When this guerrilla tactic failed I started begging for help on the various FCP forums where I ran into Ken Stone, Michael Horton, Philip Hodgetts and Jerry Hofmann. Bless these guys for putting up with me and a couple of time I thought we might have figured it out. However, as soon as I was able to meet one requirement another one failed. Then the guys over at Matrox started sending me eMails that said all I needed to do was follow the setup in the manual. Figuring I had nothing to lose at this point, I read the manual. Now I have nothing against tech support people not even when I know that they are reading from a 'flow-chart' but the guys at Matrox really started to get to me because they never understood my setup requirements and I have to say that the Matrox RTMac Manual was of no use because it only covers one setup that they call a 'Typical RTMac connection'. My problem with this is that a) nothing is ever typical and b) it did not resemble my setup.

It was at this point, while staring at the VCR , that I started thinking that maybe I had the wiring correct all along (remember- how many combinations could there be) and it was something to do with the VTR or VCR. Ok, this is going to take a lot of courage but guess what ? The damn VCR has 2 channels of audio and even though it's apparent when plugging cables into the audio jacks it escaped my nimble attention. All I had to do all along was change the audio channels. So, there's one more combination after all. 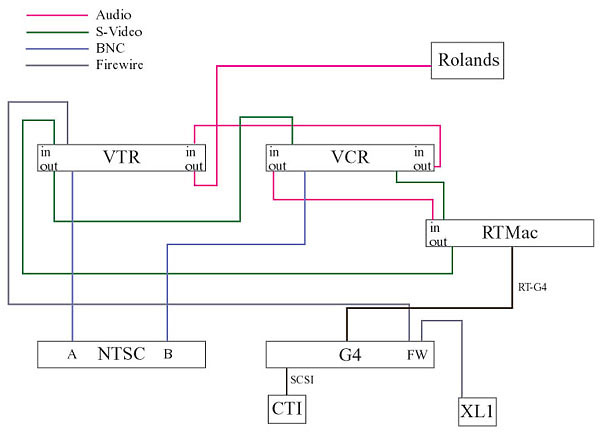 My wiring setup (pdf). The RTMac BOB has A/V running out to the VTR to the VCR where the audio is then output to the Rolands. This allows any audio coming from the G4 through the BOB to be heard from the Rolands and the video can be displayed on the NTSC monitor. As for the rest of the setup I think it's pretty easy to follow but if you have any questions please eMail and I will try my best to answer them. Below you will see my checklist. 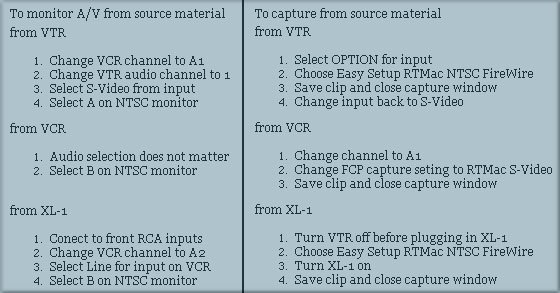 First, when starting a new project I now have several new Easy Setup choices. However, the only two that I currently use are RTMac NTSC Analog and RTMac NTSC FireWire. 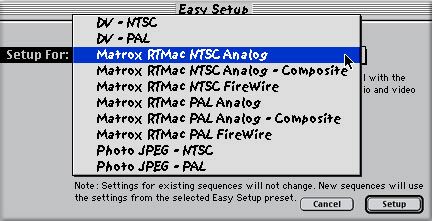 The main difference is in the capture and external view settings as seen below.

More information on the Easy Setup Capture Presets can be seen below.

Second, the only change in the secquence settings is in the QT Video Settings selction. You will now find a RTMac DV-NTSC Compressor. 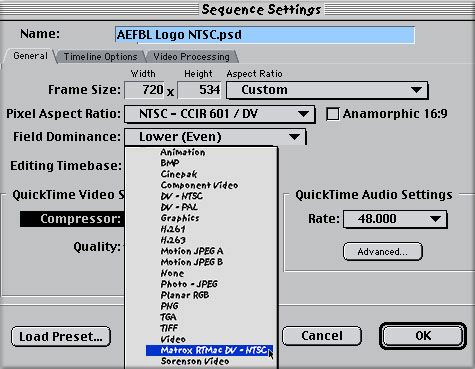 James Diefenderfer is an aspiring Final Cut Pro Editor who works for Autometric Inc., a Boeing Company. He is currently onsite as the Visualization Engineer for the United States Air Force Air Expeditionary Force Battlelab where he is responsible for the production of promotional and documentary style digital and print media. When he is not in front of a Mac he is probably skiing on a double-black diamond cliff somewhere in Montana.

All screen captures and textual references are the property and trademark of their creators/owners/publishers.