SUGARfx's Video Wall Pro (VWPro) leverages the GPU-accelerated FxPlug architecture of Final Cut Studio to provide an interesting and customizable video wall generator. The plug-in ships with both standard/light and Pro versions, both of which utilize a simple, intuitive interface to create video walls from a single video source. Each has multiple controls, all of which can be key framed. The Pro version, which I tested in FCP, provides additional 3D effects, borders, and other capabilities.

Download and install FxFactory 1.0.6, which is available without cost at the Noise Industries web site. FxFactory then installs the plug-in into both Motion and FCP where it operates as either a generator or a filter. I used the standard drop down menu to access the generator in FCP, and then added a single video asset to the video well in the "Controls" tab of the generator. Once there, you will notice numerous key-framable parameters for both 3D and 2D space as well several stock presets that can serve as starting points for your video wall. Note that any of the custom parameters you create can be saved as a your own custom preset for later use. 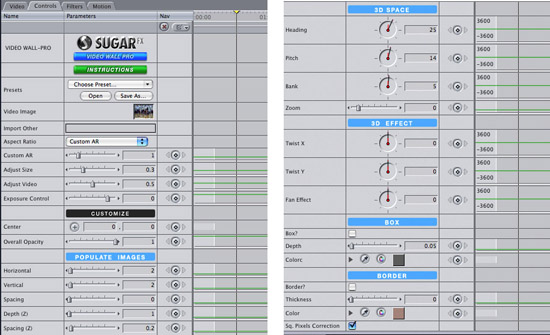 The parameters are staged in separate categories: Populate Images, 3D Space, 3D Effect, Box, and Border. There are controls for centering the image and establishing its opacity. And as I stated earlier, several presets can serve as starting points. 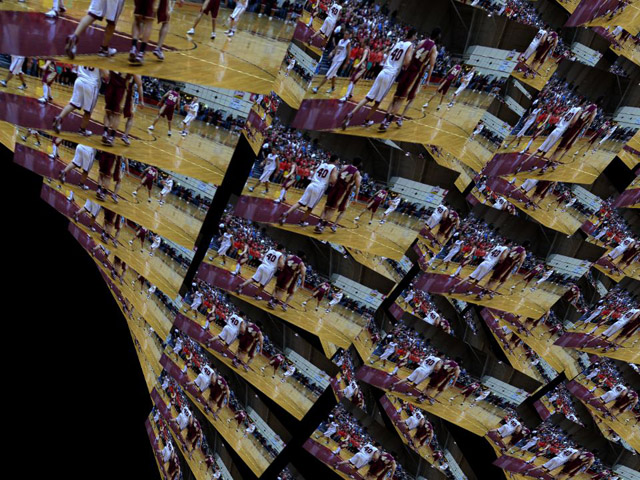 Each of the parameters can be modified using the stock FCP key frame modal interface to create both simple and complex video wall animations in 2D and 3D space.

The operation and purpose of each of the parameters is fairly straightforward. However, the developer provides additional information about this plug-in and several video tutorials to assist in learning its capabilities, particularly those in 3D, at its web site. http://www.ilearnfast.com/tutorials/tutorial_VWintro.html. In addition, a free time limited, downloadable demo version to assist in your purchasing decision in also available.

Additional motion graphic theme generators are available at the Noise Industries web site, and provided as video samples at the developer's web site. One of the most versatile is the seven (7) plug-in CineFest Theme package. Included are: 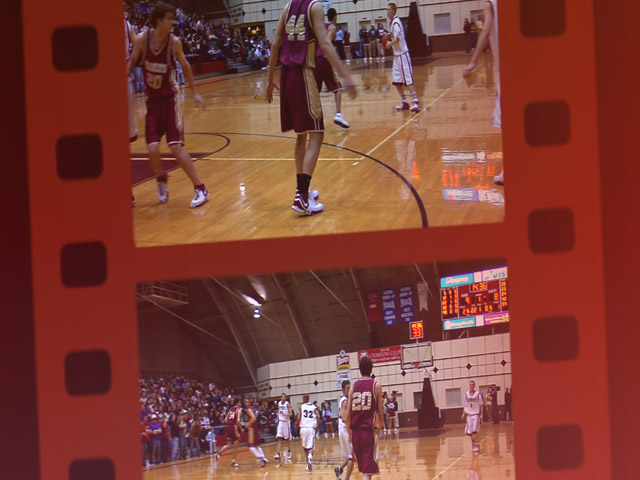 All these generators are full animated, and the lower thirds include alpha channels. The "Open" generator includes four image wells for video assets while the rest provide a singular well. You also have access to your font database for titling and sizing. The background colors cannot be modified, however. This plug-in theme set, priced at $89.00, is excellent bargain for creating a packaged look for a video project.

SugarFX provides a free downloadable Photo Montage theme called MONDRIANESQUE at its web site. It can be used to create an interesting moving montage of photos that are populated from a user defined photo folder. In addition, a fifteen (15) day demo version of the commercial plug-ins and generators is available at the Noise Industries web site. Again, FxFactory is required for installation.

Video Wall Pro, and the other plug-ins mentioned here provide excellent tools for creating a variety of motion effects in Final Cut Pro and Motion. If you are a novice, you can start with a stock preset and augment it to meet your particular needs. Or you can mix and match various parameters in 2D and 3D space to create a custom look. Because these are FxPlug-based filters and generators, speed in rendering is directly related to the power of the GPU.