So, its comprehensive you want? Total Training for Final Cut Studio: A Post-Production Workflow just about does it all for the new or experienced user of Final Cut Studio. Be prepared, however, to spend lots of time with this 2-disc set as it comes with 7 hours of tutorial instruction. All project files are on one disc, and the tutorial lessons are on the other. Once you've copied over the project files to your hard drive you should be ready to go. Don't be in a rush as there is so much here you will not want to miss anything that might have been the key to creating an easier and more effective workflow.

Presented by Yan Shvalb, an editor who clearly knows his subject, narration is full of information, tips and tricks to keeping your entire project on pace. While sometimes I thought Mr. Shvalb spoke a bit too briskly, he creates an amiable atmosphere within the workflow and enunciates clearly so that everything presented is easily heard and understood.

There's not much that isn't covered in Total Training's Final Cut Studio. The syllabus is one of the most comprehensive that I have seen with an excellent introduction that leads you to creating an organized round tripping between Final Cut Pro, Motion, Compressor, DVD Studio Pro and Soundtrack. The only Apple application left off the menu here is Live Type, primarily done so because much of what you may want to do in Live Type can just as easily be done in Motion. 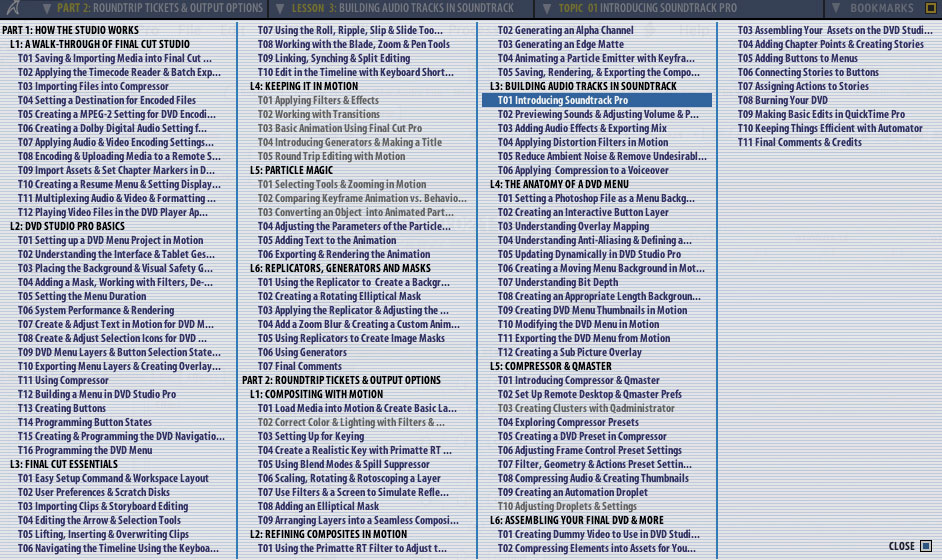 With such an extensive itinerary, plan to spend several sessions with Final Cut Studio: A Post Production Workflow

I should point out that this is not a tutorial set for those who want learn how to use each application from start to finish. It is not a 'How do I achieve this effect?' type of disc. Rather, it is a very substantial tutorial of how to integrate and utilize these applications parallel to each other in order to develop a more efficacious workflow for your various projects, round tripping between them and how much easier your workflow can be when you utilize the tools you have before you. Never the less, in the initial section on Final Cut Pro, Yan Shvalb does present one of the very best lessons on the various tools in Final Cut Pro that I have ever seen. Once again, he does talk a bit too fast for my tastes and I did find myself going back to catch all that he said on occasion. My only other whine is that while the lesson progress indicator can be grabbed and dragged to different parts of the lesson, you really can't tell and must make a guess as to where in the lesson you are dragging it to. This might only be an issue for the first play through because Total Training has incorporated a great feature, which allows you to bookmark individual sections for reviewing later on. You just need to click to the right of the titles on the top and a dropdown menu of sub lessons appears. Click on any of these and a permanent bookmark is created. Thus, even after ejecting the disc, once you put it back in the computer, the bookmarks are retained for you to get to instantly. Should you want to delete one of your bookmarks, that may be accomplished just as easily. 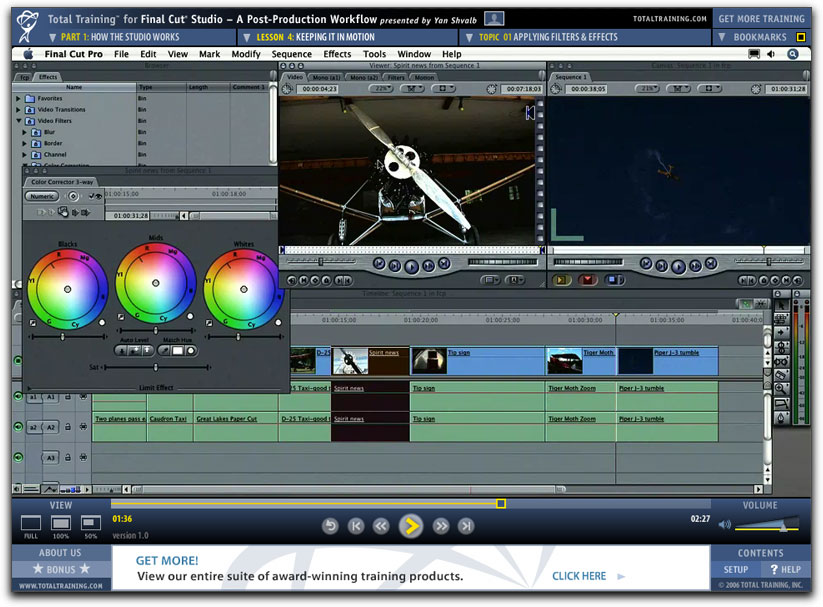 It all starts with Final Cut, its many tools, filters and generators. Notice the contents label at the bottom right;
you can click on this and the entire syllabus will come back up for you.

You'll be happy to see that Mr. Shvalb spends a great deal of time demonstrating the use of Motion. He displays a real enthusiasm for Motion so it is clear that he is not just going through the motions (pun intended) when he displays so much that can be done here. 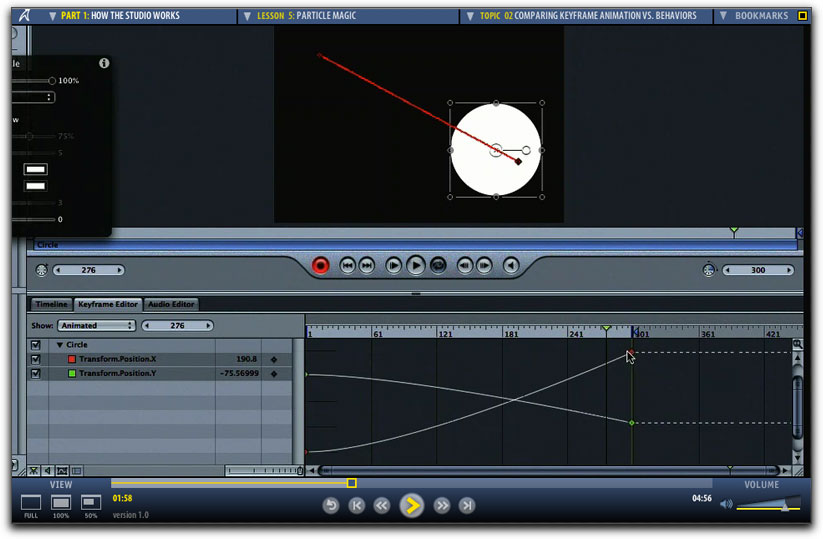 A clear and precise explanation of keyframing in Motion here, but this disc goes much deeper than that.

This review really would turn into an extremely long dialogue if I went into each of the many excellent lessons on how to develop a more beneficial workflow for you while editing. Just let it be said that you will not be shortchanged on the coverage of any of the standard Apple applications that will fit your general workflow. 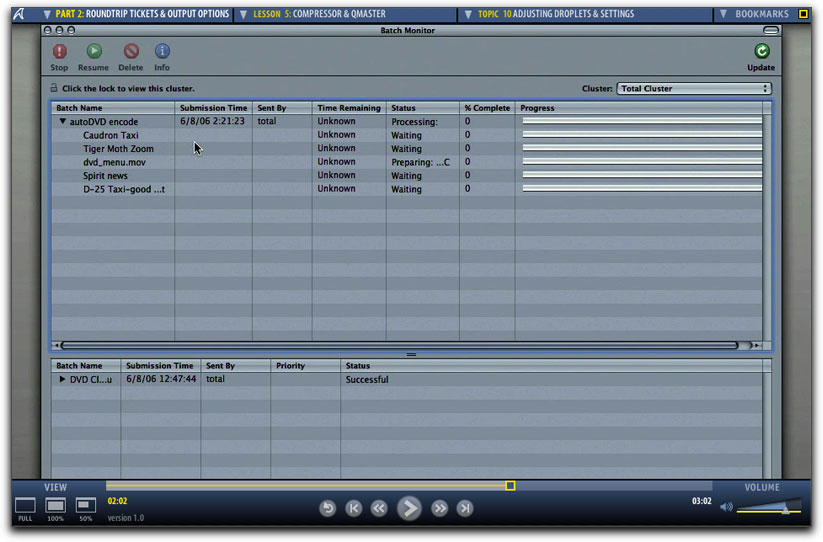 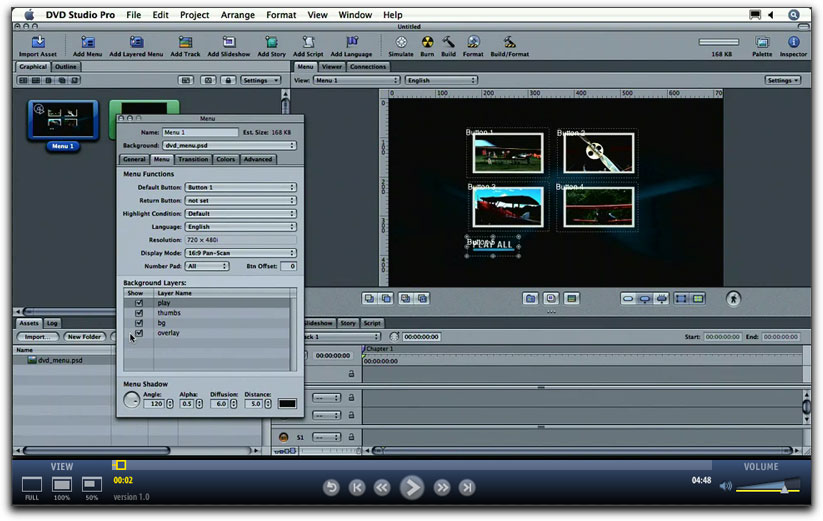 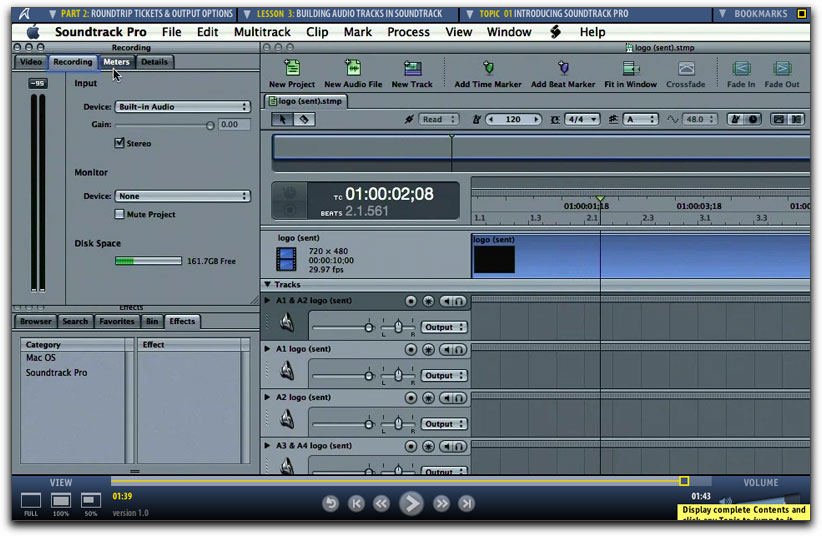 I found the section focusing on the use of Compressor and Qmaster to be quite informative.
DVD Studio Pro is not left untouched and there is even a brief coverage of round tripping with Soundrack.

Bottom line time; despite the sometimes too fast delivery, I found that Total Training's Final Cut Studio, A Post Production Workflow to be of the highest quality. The ability to set the screen size, bookmark sections that you think you might want to go back to and the depth of the instruction really does set an incredible standard making this a tutorial of real value. Keep in mind that this set is not for the absolute beginner, but if you have a good general understanding of any of these applications than this is the tutorial set that really can put all the pieces of the puzzle into proper perspective for you. For more information, go to Total Training.