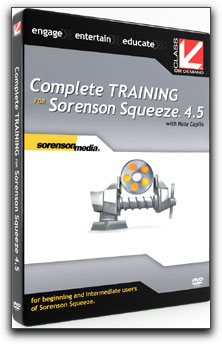 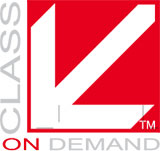 
The Sorenson Squeeze 4.5 Compression Suite is certainly a preferred tool for many who wish to deliver high quality MPEG-4, Flash, Real Media, Windows Media Files and QuickTime files. However, as easy as it is to use, there are many tools at your disposal in Squeeze 4.5 that are not so obvious to the uninitiated.

That's where this tutorial DVD comes in produced by Class on Demand, a producer of education and training programs for a very large segment of editing software from Adobe After Effects and Photoshop, Final Cut Pro, Avid Liquid, Boris, Sony Vegas and Pinnacle. This is the first tutorial I have been able to see from Class on Demand and I am duly impressed. Capable of working on Mac OS X or Windows XP/Vista and QuickTime 7, the Complete Training for Sorenson Squeeze 4.5 tutorial disc does a completely thorough job initiating the user with a great many uses and techniques that will only benefit one's video project. It is aimed at the beginner or intermediate user for Sorenson Squeeze but could be a good disc for the advanced user as well who, perhaps, is not quite as competent with one type of file or another. This DVD spends a good time on instruction with each format and doesn't seem to leave out too much.

Once the disc is installed, it comes up on Projector with a 10 1/2" x 7 3/4" window. This window cannot be resized, as I wished it could have, but the tutorial interface presents top-notch clarity of sound and picture. Your host for this DVD is Nate Caplin who has been a specialist in web capture since 1995, writes for DV magazine and teaches video compression and streaming classes at MacWorld Expo and Apple's WWDC. Perhaps you have met him there. At any rate, Nate has a fine narrative voice and pleasant instructing demeanor. 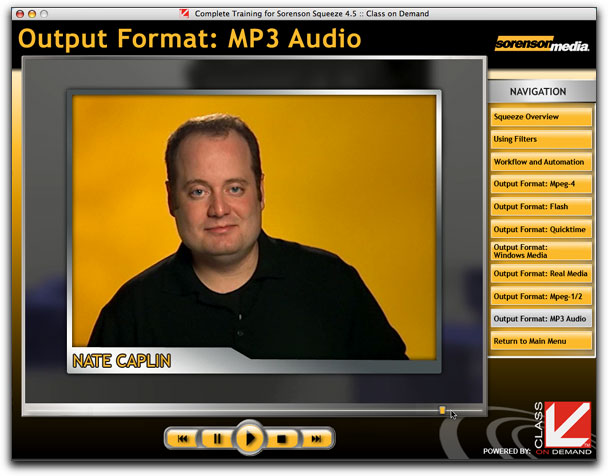 Nate Caplin at your service

The training is what would be expected of any quality tutorial disc. It's chapters are perfectly sequential taking you from a general overview of the Squeeze interface, and a must see chapter on Using Filters and overall workflow. We then get into the specifics for the various output formats MPEG-4, Flash, QuickTime, Windows and Real Media, MPEG-2 and MP3 Audio. For anyone new or not terribly experienced with the Sorenson 4.5 suite I would suggest not skipping any of the chapters at all while even the intermediate user will find much to learn.

The Watch Folder in Sorenson 4.5 allows you to batch compress various source files into several delivery formats without having to assign the settings for each individual process. This is accomplished by creating a separate folder on your system that Sorenson constantly monitors. You can then assign however many compression encoding presets as you like to the folder. In addition, any further files you place in the folder will also be compressed using the attributes you've previously selected. The coverage of this convenient workflow shortcut is well covered in the Complete Training DVD.

Included in the disc are source clips used to demonstrate Sorenson 4.5, with you may utilize along with the training. I didn't use them, as I chose to use my own video applying a variety of compression presets during the tutorial. 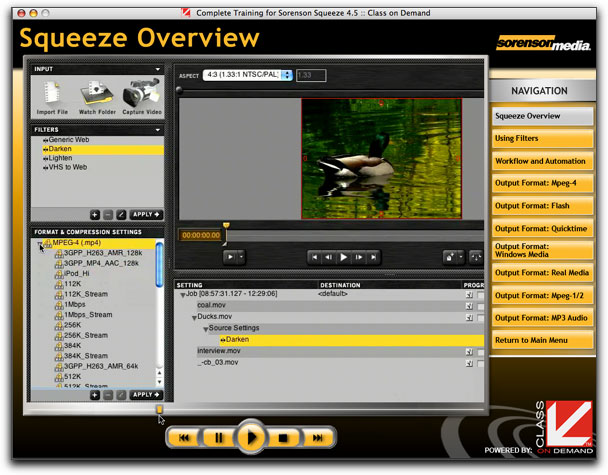 Demonstrating the many compression presets is just one of this disc's features.

One chapter not to be missed is that which covers Filters. It reviews with you the best way for you to apply filters to your projects, adjust the settings and create custom presets for future use. Using the easy to miss frame window button allows you to see immediate results before going to compression. This helps a great deal preventing wasting of time and coming up with results not to your liking. 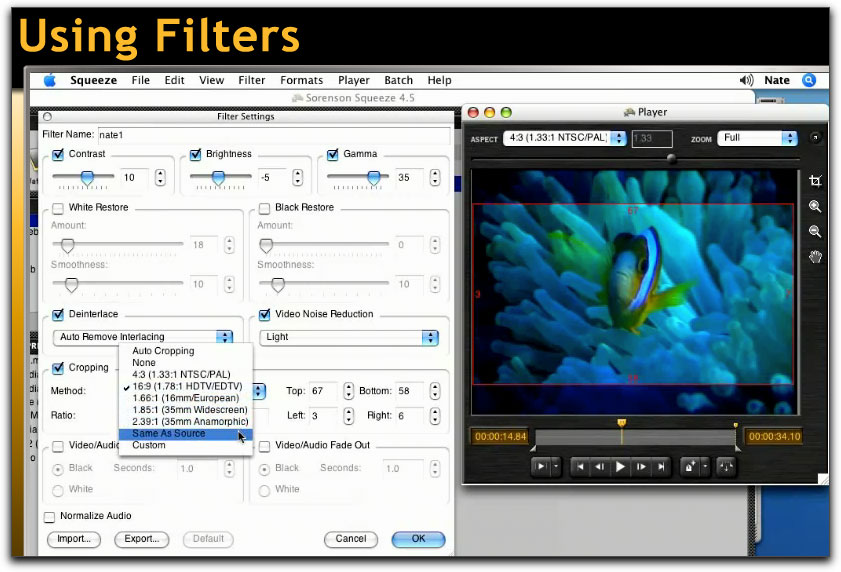 Reviewing the uses of the filter parameters and Nate Caplins advice on what to use and what to avoid.

While I haven't tested this aspect yet myself, the chapter on burning DVDs straight from Sorenson 4.5 provided thorough step-by-step directions. 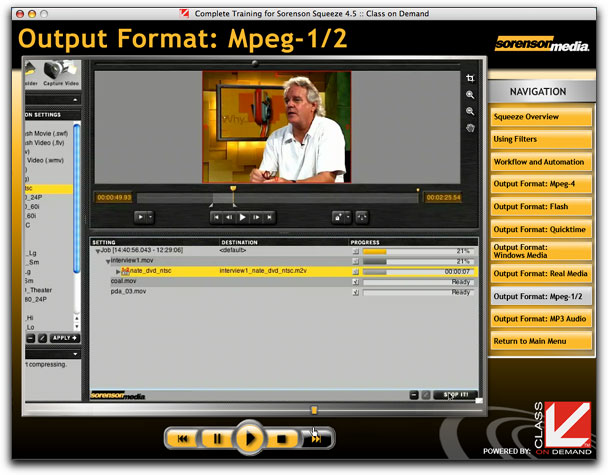 Straight from Sorenson 4.5, burning a DVD is just another possibility that some may not be aware of.
Complete Training for Sorenson 4.5 teaches you how.

Anyone who has attempted to compress videos for the web, for DVD, or for any number of other purposes knows that it can be time consuming, and sometimes frustrating getting things just right either for yourself or your client. The Complete Training for Sorenson 4.5 with Nate Caplin makes it much easier, especially for the newer user of Sorenson Squeeze to get the most of it with the least amount of hair pulling. There are many of Nate's personal suggestions, especially when it came to using the filters throughout the tutorial. While I felt that the narration went sometimes a bit too quickly for my tastes, this tutorial disc does what it sets out to do, and that is to thoroughly review and teach the complete workings of Sorenson 4.5. I definitely learned a few new things and that's a good bottom line right there.