Introduction
This article will take you through the process of creating Node Trees in the ColorFX Room inside Apple's Color, along with a an overview of the FCP to Color round trip workflow and the special situation of working with interlaced video inside Color. The project will involve adding a vignette shaped blur to a sequence of interlaced video shots. The footage is a chase scene from a puppet video called Zangth Valley, that I codirected with the incredibly talented puppeteer Alice Chapman. Adding a vignette shaped blur will fake the effect of a shallow depth of focus. This will direct attention to the characters within the shot and, hopefully, disguise some of the less-than-perfect backgrounds.

Getting Footage Ready for Color
The first step is to edit the shots into sequence. Then the sequence needs to be prepared for sending to Color. Although Color can handle multiple video tracks, it is easier to navigate the timeline if all the shots are on V1. For composite shots, keep in mind that transitions, filters, generators and titles are not included in sequences sent to Color, but are applied to the footage when it is returned to FCP, when using the FCP to Color round trip workflow. I am working with an edited sequence that was archived to tape (thanks to modern color correction, I get another chance to polish the project!) I place my chase sequence, which is a short, cuts only edit, on to the timeline and use the blade tool to cut the movie into each shot so that when applying color effects in Color, each shot will appear on its own (otherwise I would have to keyframe all the color effects at every shot change!). 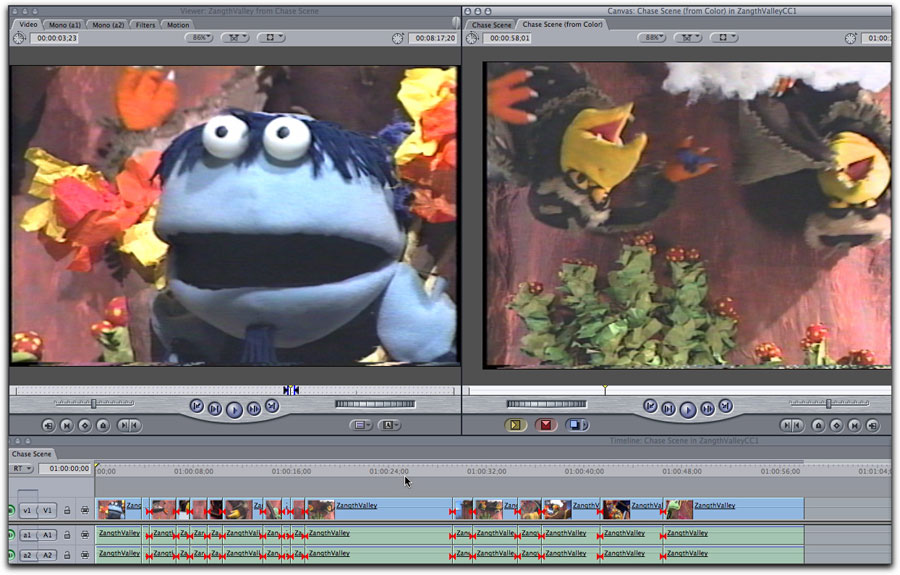 Once the sequence is ready, I select 'File/Send To/Color'. This launches the Color application and creates a new project with the exported sequence. So far, so easy! 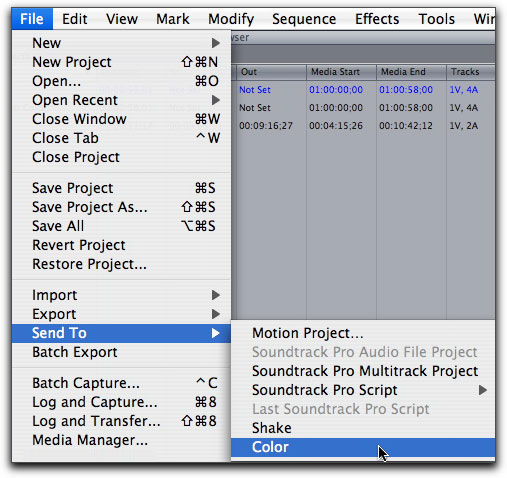 I double check to make sure "Deinterlace Renders" and "Deinterlace Previews" are both unchecked in the "Project Settings" window of the "Setup" room, since I am working with interlaced footage and I want it to stay that way to preserve the smooth, interlaced motion.

The ColorFx Room
Select the ColorFX Room by clicking on its tab at the top of the screen.

The Node View will be empty at this point, since we haven't added any nodes, but the following diagram shows the parts of the room (in a two monitor setup):

Node List: this is where all the available, individual, color effects (Nodes) are listed.

Node View: this is the area where you combine Nodes to create effects. Nodes can be dragged and dropped or double clicked in the Node List to add them to the Node View.

Parameters Tab: this is where you set the parameters for each node, if applicable.

ColorFX Bin (not shown): this is where preset combinations of Nodes (Node Trees) can be loaded and saved.

Time Line: obviously, this is the video we are working on. The effects are applied to the shot under the playhead (vertical line) 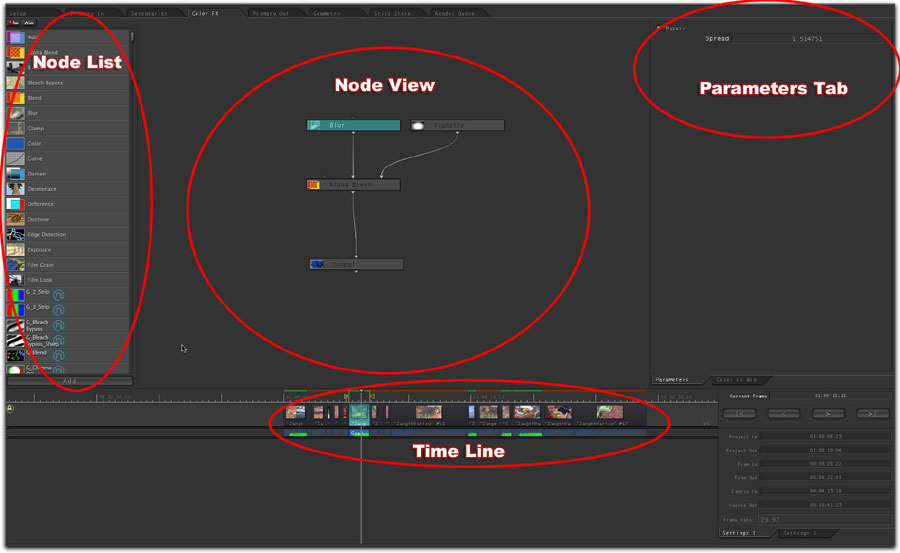 Building a Node Tree
The color effect that I want to create is a vignette shaped blur. I start by dragging the Blur Node onto the Node View. This adds two Nodes: the Blur Node; and the Output Node. You must always have an Output Node to pipe the effect onto your video. Color conveniently provides one when you drag a Node onto a blank Node View (double clicking a Node in the Node List does not do this and you will have you manually add the Output Node). If there is no Output Node, or it is disconnected, the color effects will not be applied nor rendered to your footage. 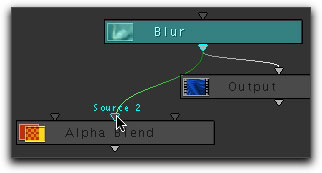 At this point, the Blur Node is connected to the Output Node. The line connecting them is called a "noodle". All Nodes have an output noodle, and most have one or more inputs. I want to connect the Blur Node to the Alpha Blend Node. Clicking on the triangle on the bottom of the Blur Node grabs the output noodle. Drag this to the center input triangle at the top of the Alpha Blend Node. If you hover over the input triangle, while dragging a noodle, the input name will appear, in this case, "Source 2". In the same way, I connect the noodle from the Vignette to the alpha channel input, the triangle on the far right of the Alpha Blend Node. The left input on the Alpha Blend, "Source 1" is the image over which the "Source 2" input gets blended. If this is left blank, the source image is used. To break a noodle connection, grab the noodle from the input connection and drag to an empty place on the Node View. Nodes can be rearranged by clicking and dragging on them. When adding Nodes from the Node List, dragging a Node over an existing noodle, will add the new Node into the tree at that point. 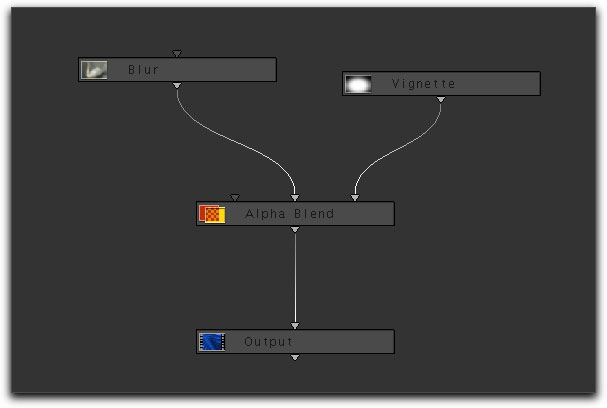 Clicking on any one of the Nodes I have added brings up its available parameters in the Parameters Tab. Double clicking the Node will cause the Preview window to display the effects of that particular Node, and open its Parameters. It can be useful to double-click a Node to display its output, then single click another Node to adjust its parameters while viewing the output of the first Node. The effect of any Node can be turned off by checking the "Bypass" box in the top of the Parameters Tab of that Node.

Working with Interlaced Video
There are times when interlaced video is desired, whether for the smoother motion it can entail in a sports broadcast, or the aesthetic it produces for a news or documentary show. My little video is interlaced, and I wish it to stay that way. This creates a small hiccup in the processing because Color works with progressive frames. Color was designed as a high-end color correction tool, intended to work with progressive footage. For the most part color correction is the same for progressive video as for interlaced. It only becomes an issue when working with blurs and denoising effects.The following image shows the combined interlaced fields as they appear in Color. 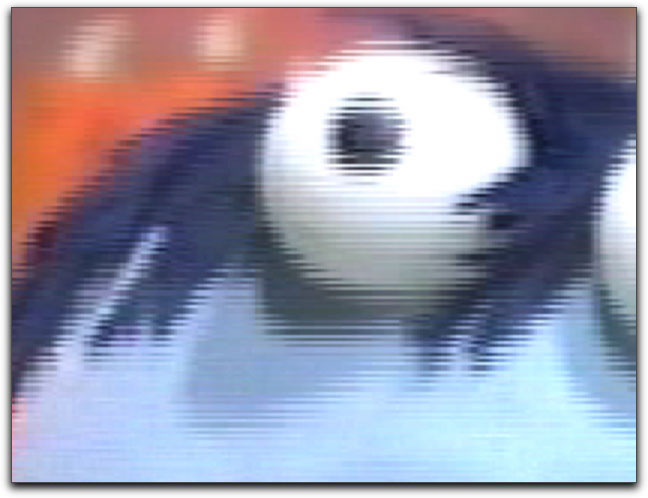 If I apply my Vignette Blur Node Tree, my fields will get blurred and the benefits of interlacing may be lost.

Fortunately Color has the tools to deal with this. The Deinterlace and Interlace Nodes enable me to apply my effects to each field, as a progressive frame and then recombine the post-effect fields back to interlaced video. We will need to have two branches of the Node Tree, one for the even field and one for the odd. 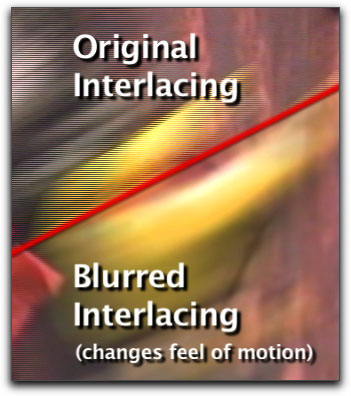 Drag the Interlace Node from the Node List and drop it on the noodle connecting Alpha Blend to Output. 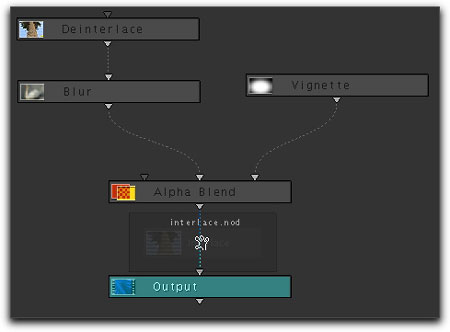 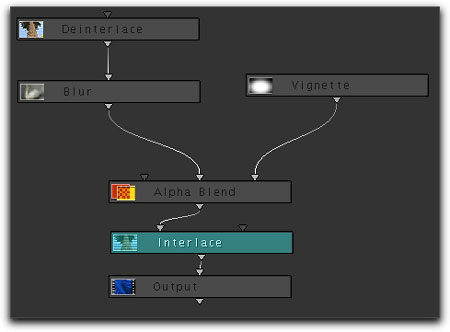 This is probably a good time to save the Node Tree. Click on the ColorFX Bin Tab. This brings up the list of existing Node Trees and a saving/loading interface. I type an appropriate name in the 'File' field, and click "Save".

Once all the shots have the Node Tree and have been tweaked so the vignette is in the appropriate place, I add the shots to the Render Queue and set them rendering.

Once the render is done, I need to send the sequence back to FCP. Under 'File', I select 'Send To/ Final Cut Pro'. Color will process the XML and flip me back into FCP. The new sequence appears in the shots bin with "(from Color)" appended to the name. 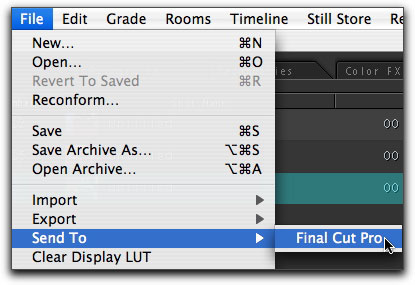 Conclusion
This overview has shown how to create Node Trees in the ColorFX Room of Color and touched on the round trip work flow with FCP. I have shown how to work around the limitations of Progressive frame processing when working with interlaced video. This workaround is only applicable when applying effects that change the spatial arrangement of the pixels or image, such as blurs and noise reductions. Color correction that adjusts levels works just as well on interlaced as on progressive footage. 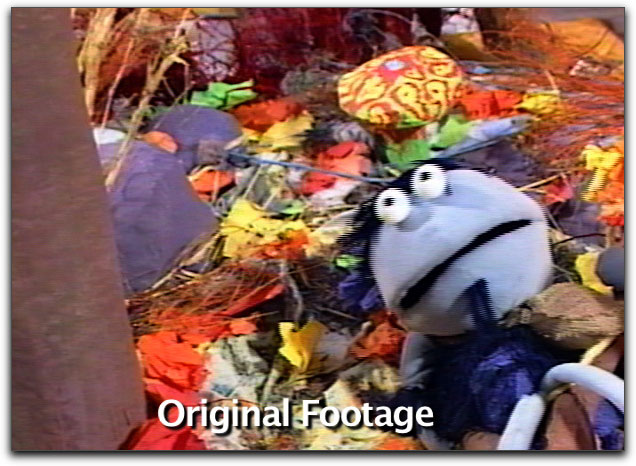 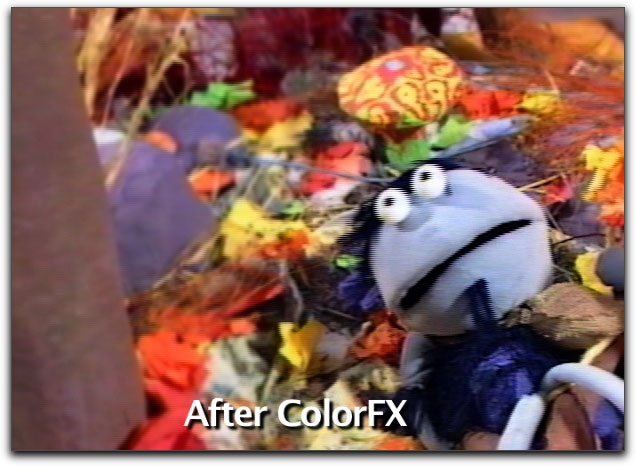 Color is a very powerful color correction package that was designed for highend use. Thanks to Apple, this tool is now available to a lot more of us to use on our perhaps not quite as high budget productions.

Addendum
Since interlaced video is only a problem when adding blurs and denoising, I wanted to show you a denoise Node Tree for interlaced footage. Here is the "noisy" image: Notice the blue sky... 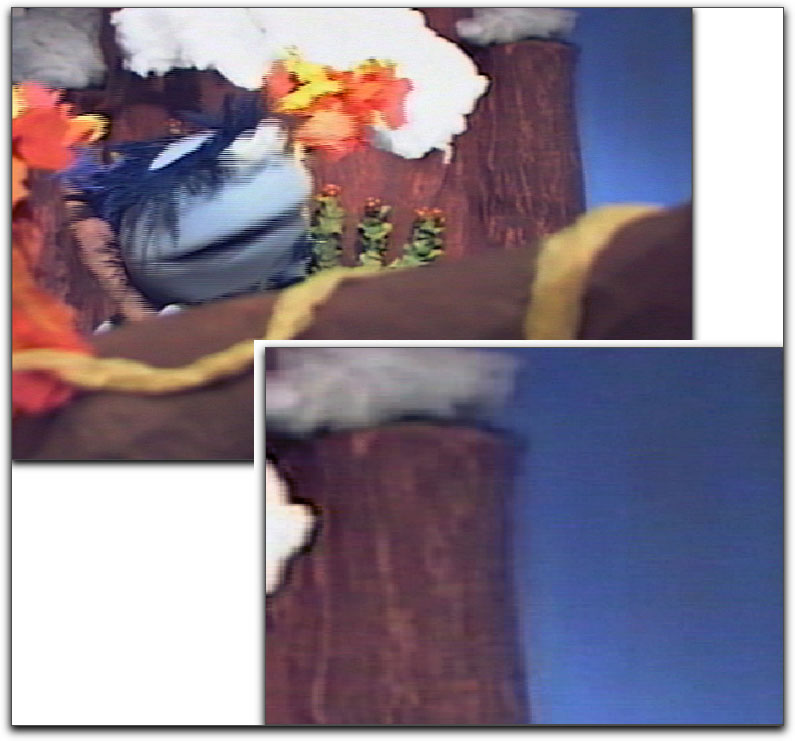 Applying a denoise, such as the Nattress Advanced Plugins for Color, G Smart Denoise, Node removes the noise, but also strips out the interlacing. This is the same problem we saw above with adding a blur to interlaced footage. 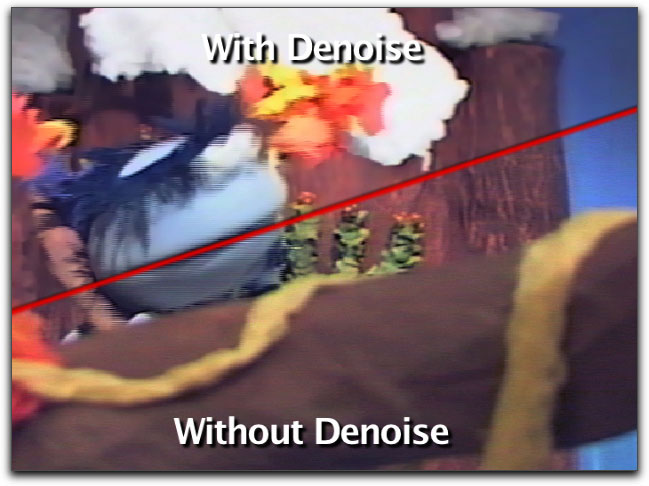 The solution is the same: create a two branch tree and modify each field separately.

The end result removes the noise from the flat blue sky, but keeps the interlacing. 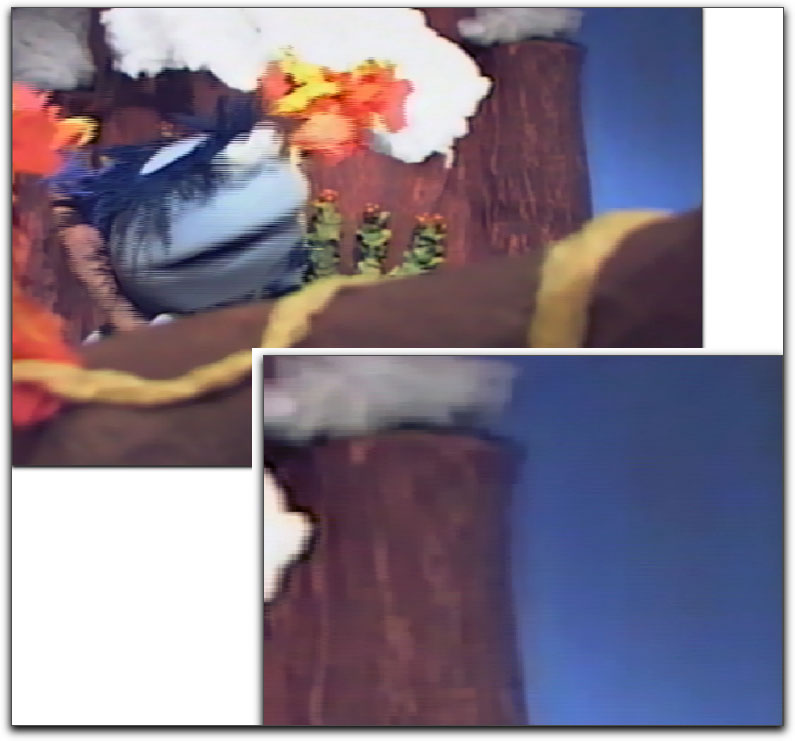