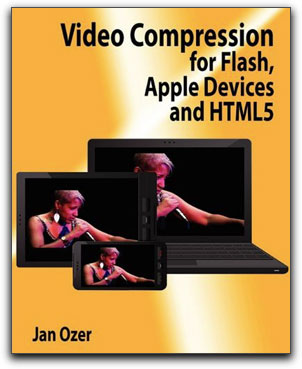 
The depth and breadth of analysis from single frame quality to current industry trends in Jan Ozer's "Video Compression for Flash, Apple Devices and HTML5" makes this a great education for both beginners and veterans. His side by side examples of encoded frames comparing settings, codecs, and encoding programs can set the lightbulbs popping for beginners, while charts comparing how major media and corporate sites approach settings, is great information for experienced compressionists who'd never have the time to do this kind of targeting research.

Ozer tackles the daunting array of choices ranging from codecs, settings, delivery platforms, encoding programs and, how to make sense of all this so you can reach your target audience and lays this out with a logical progression as each chapter builds on the previous.

He begins with basic concepts such as frame rates and data rates and then goes through universal parameters that apply to all codecs such as constant and variable bit rates along with a basic understanding of key, predictive and bidirectional frames (I, P, B frames). With a handle on that, there's a comparison of codecs and then, once you see the value of H.264, he walks you through deeper settings to take best advantage of H.264.

The real gem of his presentation are the encoded frame examples every step of the way. It's hard for some to grasp concepts like a b-frames but seeing an example picture of an encode with and without b-frames is an a eye opener. Note the detail on the face and the fence on the example on the left. 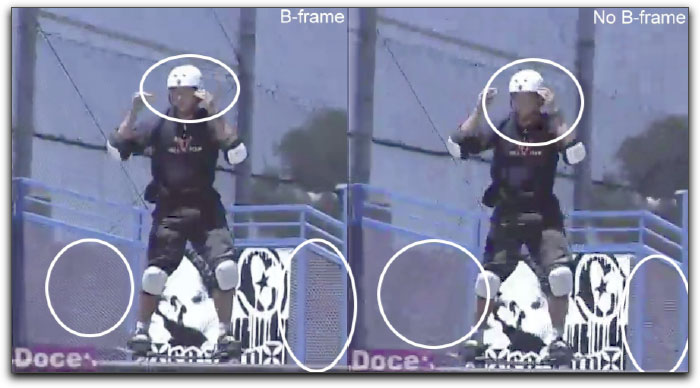 Figure 4-12. A fle encoded with B-frames on the left, without them on the right.

And in this example below of VC-1 (WMV), H.264, VP6 (commonly FLV Flash) note how much better H.264 looks particularly on the fingers and the dark background.

Ozer acknowledges a bit of a problem with the book printing. The printed images are low resolution black and white. To solve this he provides a link to a PDF with higher resolution color graphics and charts. That's where these images come from. I downloaded the PDF to my iPad, making it easy for me to refer to the images while reading. There's also links to additional articles in bit.ly format throughout so having an internet connected device extends the value of the book.

He has charts testing Flash H.264 playback on a variety of Macs and Windows computers going back to 2003 so you'll have a good idea how those older systems will handle the files. He also does an analysis of U.S. and European web video including news, entertainment, business and others and their settings. It's the kind of research many of us wish we had the time to do because we can come away with a better picture of how to target our encodes.

Below is typical chart. It's an analysis of select U.S. Business to Business web videos which follows with an explanation of the importance of bits-per-pixel.

Table 5-9. The bits-per-pixel value of these files lets you compare the compression applied to each video file.

He goes on to cover producing for iOS devices including Android, Blackberry as well as others and the complexities of compatibility with research on settings including breakdowns by program content. That's followed by an overview of various types of Adaptive Streaming which are technologies in which the viewer's internet conditions may determine the bit rate and frame size of delivery.

Now that he's explained what you might need to know to get video to any target, he discusses encoding programs and codecs choices including H.264, WebM, VP6, WMV. Mac and Windows speed and quality tests are done with Telestream Episode, Sorenson Squeeze, Microsoft Expression Encoder, Adobe Media Encoder.

Of course now you need to figure out the best way to distribute your encodes using User Generated Content (UGC) sites like YouTube as well as Online Video Platforms (OVP) such as Brightcove. At this point he breaks a bit of the linear progression to talk about some other important topics including Live streaming, a fast growing field in which events are broadcast live over the internet using real time compression software and hardware. He concludes this segment in which our veteran protagonist gets to be a beginner writing about his first live webcast. I'd love to see this chapter expanded in the future since it portends to be a very big field in areas such as live news, performances and user generated talk and interview shows.

He concludes by addressing file analysis, something rarely touched on in other books. These include tools such as MediaInfo which reveal codec information as well as parameters such as data rate, profile and level. This can be critical when working on file compatibility issues. Bitrate Viewer which expose second by second data rate which is important when troubleshooting quality and playback issues in parts of files. 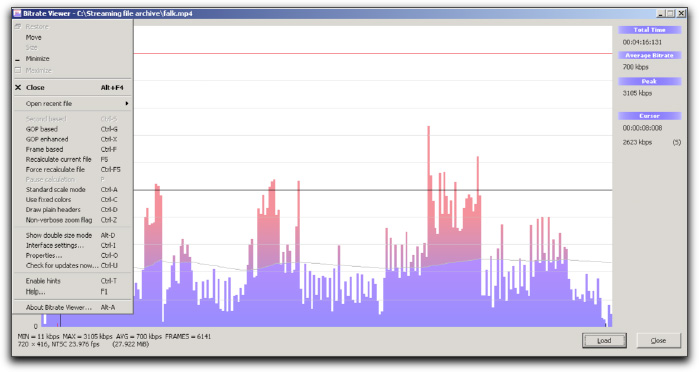 Figure 13-3. Bitrate Viewer shows you how the data rate varies over the duration of the fle.

As evidenced by the screenshot, these mostly free tools are mostly Windows only. Keep in mind the book is not Mac specific so you should seriously consider getting Parallels or VMWare Fusion and running Windows 7.

Like all books on current technologies they can date quickly and this book is no exception. This begs the question about where to go as the industry advances. Ozer has an excellent solution to that because once you've finished the book you can go to his Streaming Learning Center site which he updates frequently with articles, tutorials and analysis.

The book is certainly comprehensive, covering the gamut of web compression and delivery. Despite it's depth it's not an intimidating read because Ozer has a very down to earth friendly style. The extensive pictures and graphs go a long way towards making the information easy to visualize and understand. I highly recommend it.

Craig Seeman started in post production when tape was fat and he was thin, in 1981. When he started using Avid and its fuzzy images in 1989, he knew compression would be a booming field in the distant future. In 1999 they tossed Media Cleaner in front of him and asked if he could send the results to clients and Craig learned how to make his own fuzzy pictures a little less fuzzy while compressing fast action sports. In 2002, Craig and his wife Michele opened their own "mom and pop" production facility. In keeping with his diverse past, Third Planet Video does a little bit of everything. Every shoot and edit ends with compression. It's the last thing the client sees, so it's got to look good.