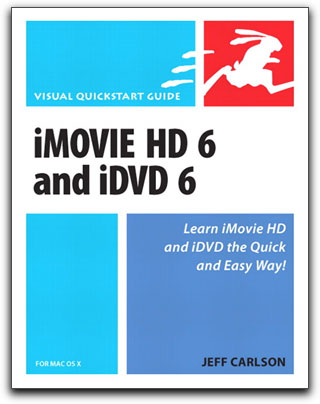 
While the Final Cut Pro community tumultuously grew into many thousands of numbers, the iMovie and iDVD ranks also grew, albeit, more quietly. Never the less, the need for information, tutorials and supplementary materials has burgeoned along with increasingly vast sales and usage of both these applications.

I can't say that I have used iDVD very much and have barely touched iMovie but both have developed into extremely valid programs worthy of most any editor seeking excellence in the results via a less complicated workflow than either DVD Studio Pro or Final Cut has to offer. With that in mind, Jeff Carlson has written and published a superb book designed to get the editor in either of these applications up and running in very little time and as painlessly as possible.

The writing is clear and easy to understand even for the complete novice and is beautifully illustrated by both colorful graphics and photographs. In actuality, this is really two books in one. The first book contains 18 chapters covering everything for the initial shoot and composition through to easily importing your footage, managing clips, editing of both the audio and video including applying transitions, titles and effects. Taking it a step further, the iMovie and iDVD Visual Quickstart Guide provides extensive chapters on scoring your movie using GarageBand, exportation of your films and sharing them via Email, iWeb and Bluetooth. As a final segue to the iDVD section of the book, chapter 18 focuses on moving your iMovie to iDVD.

With each chapter are a number of valid and welcome highlighted tips to aid the editor. Despite the great explanations of what you are doing and why, Jeff Carlson has set up each task as a number of sequential steps to follow in order to complete the objective. You would be hard pressed to get lost or confused within the confines of this Quickstart Guide.

The iDVD section is no different in its quality. Consisting of 5 chapters, the newbie to iDVD will get up to speed in no time at all. The experienced user will find a plethora of tips and information that he/she has probably forgotten or didn't know about. Once again, it is all in the excellent organization and sequential learning that has been built into this book that makes it all possible. In addition to the typical overview of iDVD, chapters focus on the various iDVD themes using motion and basic animation, customizing your themes, how to utilize slideshows to your best advantage and finally creating project archives, encoding and burning.

The bottom line is that what we have here are 295 pages of superlative writing allowing the editor to climb the ladder towards mastery of both of these applications. I wouldn't hesitate to recommend this book to the new editor or to the teacher whose classes are in need of just the right manual.