For years now we've had to live with the fact that while FCP projects could travel forwards from one version to the next, (with varying levels of success) they could never go back. Yes you could use EDLs and Batch Lists, but it wasn't easy, and it wasn't enough. XML import and export has changed all that, and it's now very easy to move an FCP5 project back to FCP4.5, or even 4.1

First select what you want / need to export.
If it's just one sequence, select that, either in the browser, or by making its open timeline active.
If it's a bin of clips, select that.
If it's your whole project, make the browser active, and make sure nothing in it is selected. 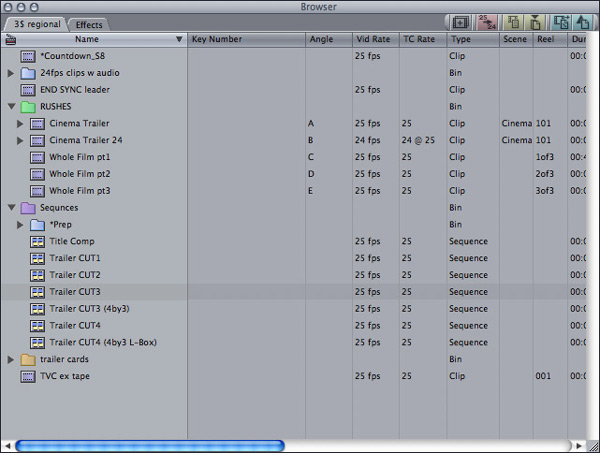 Now to Export. And there's no surprises here... 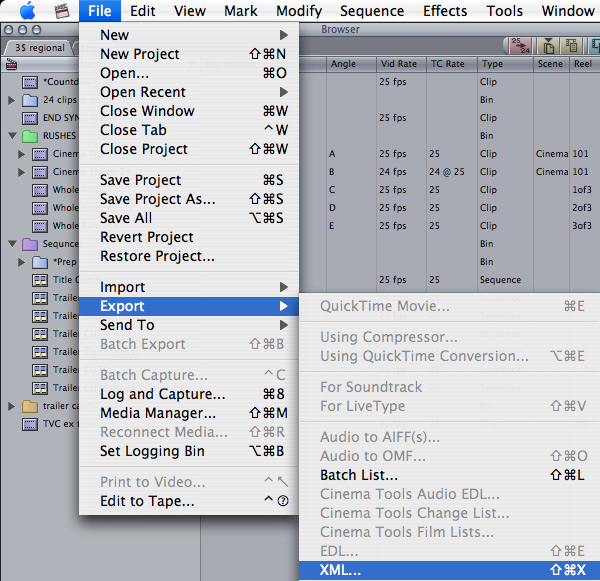 I've got my keyboard mapped to Shift Apple X (for XML) for XML export,
and I use Shift Apple C for XML import. (it's next to X!)
Buttons are good, too.

When the Export XML window opens, you'll see that it gives you a summary of what you've selected. 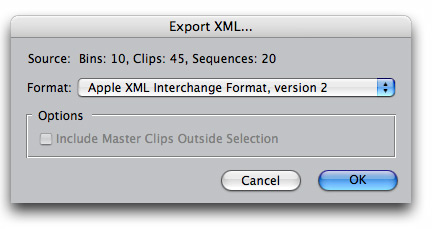 The last item in the window is the option to Include Master Clips Outside Selection
That's greyed out in my first example, as I had selected the entire Project, so there are no master clips outside of my selection.

You might use this option if you only selected a sequence for export, and thought you might as well get all the rushes along with it. 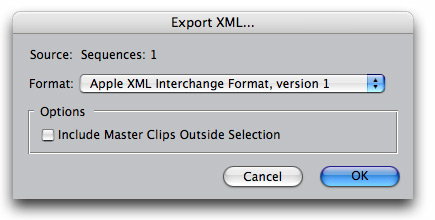 The source summary will update to reflect your new selection. 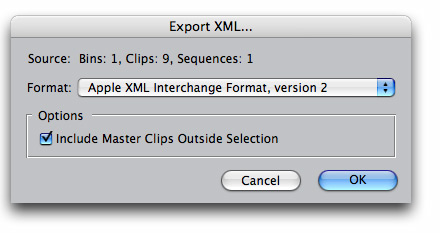 Hit OK and save your XML file.
It will adopt the name of your selected bin, sequence, or project.
Re-name it if you need too. 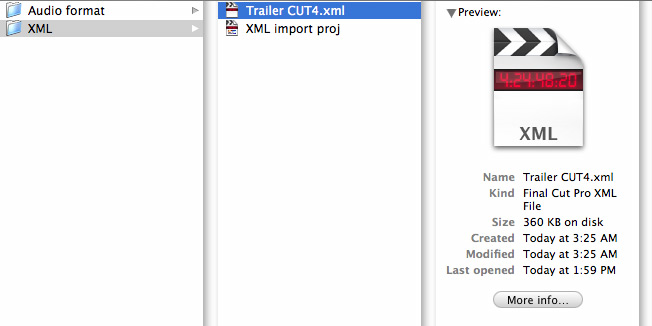 As you can see, the file looks like most FCP files.
So I added the .xml extension on saving, to make locating it easier.
As you can also see, I was up late last night. 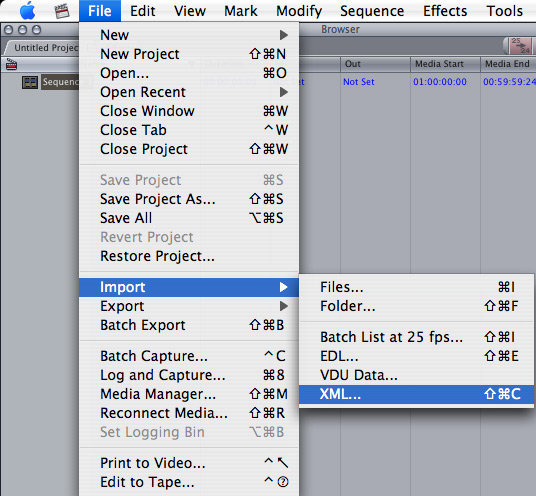 Navigate to the saved xml file, and choose it.

If you get this warning:

it means you've accidentally made a version 2 xml file, and have to export another one.

So here's what you want to see: 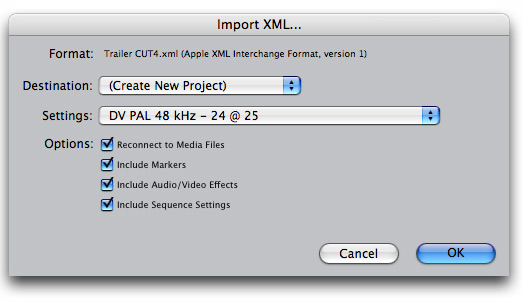 As you can see, in FCP4.5 you have no options on the import format.
It's version 1 only

Destination gives you the option of having the xml file open into a brand new project,
or into any open project

The Settings pulldown allows you to specify your sequence settings, and is set to whatever is your current pre-set.
Even though your exported sequence did have its own settings, you should set this to match.
Frame-rate, codec and aspect ratio cant be changed, but it seems that pixel aspect and filed order can, so best to get them right.

But the main reason you'd want to specify new sequence settings can be gleaned from the following options.

They're all fairly self-explanatory, and they are all set to on by default.

If I'd been cutting with low-res media on my Laptop with FCP5,
and then wanted to finish the project on another machine, which still had FCP4.5
I could set my import settings to the new sequence pre-set,
AND un-tick the "Include Sequence Settings" option.
All the sequences would be re-set to the new setting

As you can see, I've also un-checked "Reconnect to Media Files" as I'd want to do that manually, or re-capture.

Hit OK, and the import starts.

But they're non-critical errors, so don't panic, and hit Yes, to see the log.

These errors might be because I had high quality rendering turned on in my FCP5 sequence.
Beats me!

I had some columns open in my FCP5 browser, which I knew were not available in FCP4.5 (key-number, and angle)
I wanted to see what sort of issues would be thrown up, but it seems like they're not a problem at all.

Anyway the errors that are there are non-critical, so lets have a look at the sequence

And here's my FCP5.0 sequence:

Everything is where it should be, and my effects are all in place.
The only real difference is that in FCP4.5, I have less RT.
Those with eagle eyes will see some very minor discrepancies in the transitions, but it's only a display issue, and they played exactly as intended.

FCP5 deals with audio in a new way, so as to hook into the new multi-channel capabilities of QT7

Those with eagle eyes will see some very minor discrepancies in the transitions, but it's only a display issue, and they played exactly as intended.

But if you capture audio in FCP5, as Ch1+Ch2, and try to use those clips in FCP4, weirdness can ensue!
XML imported browser clips will only have ONE "mono mix" audio track.
Same goes if you manually import the FCP5 captured clips into an FCP4.5 project
The weird thing for me was that I only got the RIGHT channel. very unexpected

XML imported clips in the timeline will LOOK like they have both tracks, but you only hear one of them.
And if you match-frame from them, they appear in the viewer with only one mono track.
Dragging the clips to the browser and then loading in the viewer, or dragging back into the timeline, doesn't fix things, either

If you have to work like this, and you can get by with the audio formatted as mono mix like that, you can.
You can rescue the audio by re-opening your project in FCP5, and STAYING THERE.
(ok if you can finish in FCP5)

The missing tracks don't come back straight away.
It is not that simple, unfortunately

Trying this out I found:
Once the audio has been re-formatted to one track in an FCP4.5 timeline, it stays that way when the project is opened in FCP5.

The single track is now the left track, though. (!)

That's just the clip on the timeline, of course.
The file still has both tracks of audio in it.
You don't "lose" the audio from the file, you just lose access to it in FCP4.5

It can be "rescued" in the usual way once you are back in FCP5:

That's f to match-frame into the viewer, where you'll get all the tracks,
F10 to overwrite back into the timeline.
Your playhead winds up at the head of the next clip ready for you to do it all over.
Keep going till you've done the lot.

If all your cuts are level sync, you can do picture and sound at the same time, and you'll wind up with linked pic/sound clips.

If you've got a lot of split edits, then turn off all pic tracks, or lock them all, and just do sound.

Anyway, the track that comes back is OFFLINE, or looks that way.
You can reconnect, and all is now there.
Alternatively, you can reconnect in the browser, and then do the f + F10 trick.

I wont pretend to know much about XML, or FCP's particular form of it. The Log report, for instance didn't mean much to me. This didn't stop me from easily taking my FCP5 project back to FCP4, and for those who are interested, there is a chapter in the FCP manual that goes into detail about how to read an XML file, and useful ways of modifying it.
That's Volume IV, Chapter 12 Importing and Exporting Final Cut Pro XML, pages 163 - 171

NICK MEYERS is a Freelance Film Editor working in Sydney, Australia
He won an Australian Film Critics Award and IF Award for editing THE BANK, and gained an AFI nomination for editing his first feature THE BOYS in 1998.
In 2004 he edited the film THREE DOLLARS, staring David Wenham, Frances O'Conner, and Sarah Wynter, which at the time was the biggest budgeted feature film cut on Final Cut Pro in Australia.