It would be redundant of me to, once again, emphasize just how important the quality of the audio is both when planning preproduction, when shooting, and in post production.

For those many who have begun much of their filming using the DSLR's which, aside from being great for the photo enthusiast, can produce some beautiful video footage, but to the user's dismay, the audio quality for any of the DSLRs that I have heard is quite dreadful. Fortunately there is software that can, with little effort, ameliorate syncing issues that come when attempting to use other audio recording devices. But what about the audio recorders themselves? There are many and they vary in terms of their quality and flexibility.

Recently I have been able to borrow several of these units produced from different companies. While many of these hand held audio recorders are just fine for recording seminars, podcasts and even interviews, the Zoom H4n, which has been on the market for some time now, is my winning choice for both its build quality and audio neutrality. Just as speakers and microphones have different tonalities, spreads and colorations, so do audio recorders. In extensive tests I found the H4n to deliver rich sound in a variety of locations and under several different recording environments.

I recently reviewed the Zoom H1 recorder with favorable results. The H4n does, however, take a giant leap from H1's solid foundation and heads into the stratosphere with a multitude of additional functions, a tremendous improvement in build and handling quality and greater recording flexibility. Does that mean it is perfect? Nope but you will see later in this review that I will be only nitpicking.

Measuring at 6.5 inches long and 2.75 inches wide and a thickness of 1.5 inches, the Zoom H4n has a very solid and professional feel to it. I criticized the H1 for its cheap plastic construction despite its good audio recording capabilities, but that is certainly not the case for the H4n. The thick rubberized coating prevents accidental dropping when hand holding and, I am certain, contributes to the minimum of handling noise. 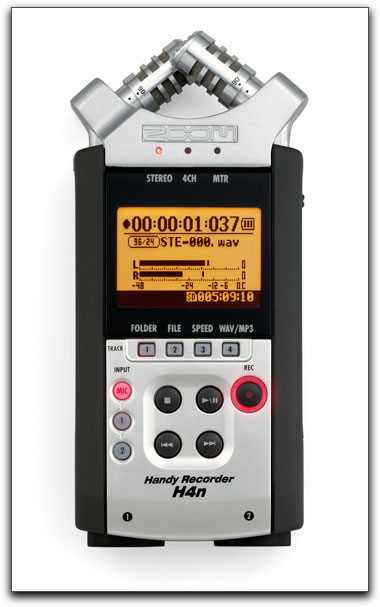 The Zoom H4n comes with two onboard X/Y stereo condenser microphones placed on the same axis which assures the user that microphones are always equidistant from the audio source for exacting localization with no phase shifting. By turning each of these two microphones you can alter the capture field from 90° to 120° depending upon your audio needs and the distance from the source that you place the H4n. For tight recording environments, a 90° setting would probably be best, but for recording, for example, a band spread across the stage, going to 120° would be more apropos. 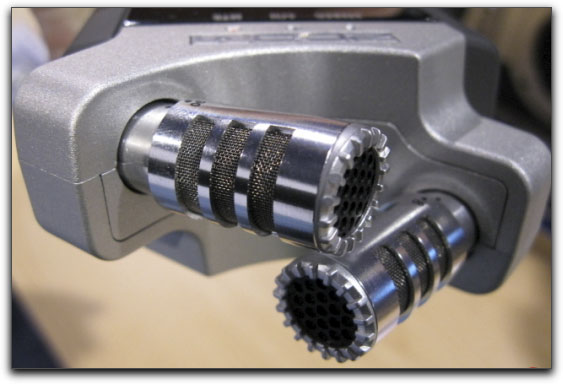 A simple turn of the onboard microphones changes to your desired capture field.

The H4n allows you to record either to a .wav. or mp3 file. I tested using only the .wav file format and I was pleasantly surprised by the excellent audio I was able to capture of a local blues band, The Committee, playing at a nearby cafe'. Once downloaded and played, the stereo spread created by using just the two on board microphones was clear and precise. The H4n does come with a foam wind screen (which I forgot to bring to this specific test), a tripod mount adapter, an AC adapter, USB cable, a solid plastic protective case and a 1gig SD memory card which proved to be good for about 1hour of recording. Powered by 2 AA batteries, a recording session of roughly 4 hours can be expected before new batteries would be needed. Additionally, the H4n has a Stamina mode switch which can extend battery life for up to 11 hours, however, using it in stamina mode restricts you from recording to only 16bit 44.1kHz in either .wav or mp3 formats and prevents you from changing some of the many other settings. I always prefer to record in 16 bit 48kHz so I left the stamina mode switch in the 'Off' position. You are able to additionally record with 24 and 96 bit settings.

The easy to read screen of the H4n provides plenty of information. When either going into the recorder's menu, or to simply start and stop a recording the screen nicely illuminates for a few seconds so that even working with it in dark environments is not a problem. On the lower right side of the screen a read out tells you just how much time you have left on your SD card to record to. On the upper right is your battery icon which clearly displays the current amount of battery power you have left should you not be using the supplied AC adaptor. As with any battery powered device, keeping an eye on the battery drain is as important as it is to always have spare batteries. If the batteries run out of juice while you're recording, the recorder will do a hard shut down and any audio that you've recorded in that clip will be lost forever. The device cannot write to the SD card the data it's been recording. Only the file that's being recorded when the battery dies will be lost but that could be the audio file that is essential and you wouldn't want to lose it. Apparently the device does not reserve the power necessary to write that data to the card. Top and center are the larger numerals displaying the time of each recording. Your recordings are individually filed and can be named using the menu operations or you can leave them as numbered files to be named after downloading to your hard drive. The format you are recording in is also plain to see on screen as well as are the very important recording level meters. Adjusting audio levels is a snap using the record level minus and plus switch found on the units right side. 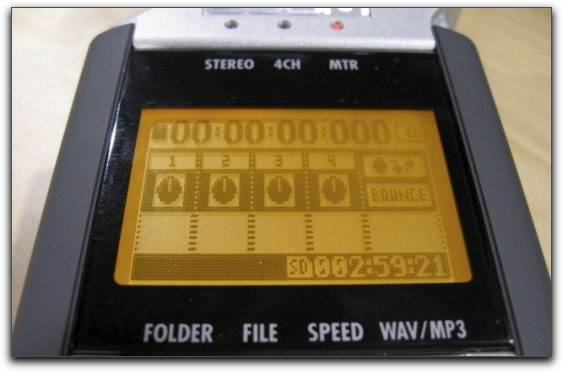 Of all the small illuminating screens I have used in the past, the H4n's is probably the easiest of them to read.

As for any recording, on-going monitoring of the audio is extremely important and the H4n does supply a 1/8" headphone jack.

You can download your audio files either using your SD card reader or via the supplied USB cable.

There is a tiny built in speaker on the back of the unit should you have forgotten to bring your headphones or ear buds and would, perhaps, be good to check that your recording is viable, but I wouldn't use its somewhat tiny and tinny sound for much of a reference other than for that stated purpose.

Perhaps the most useful and important feature of the Zoom H4n is its ability to accept full sized XLR input jacks from your own external microphones.

This is not to take away from the high quality on board mics of the H4n but to give you additional flexibility to adhere to your own recording preferences as well as to have the option of recording in either a stereo or, coupled with the multi-patterned built in mics, 4 channel mode. When recording in 4 channel mode, the recording goes to two separate stereo files enabling you to record both the stereo sound of a musical performance as well as the more direct sound from a specific instrument or voice. This provides you with more head room in post production when mixing your audio tracks. A multi-track recording mode is also available though I found the good sized manual to be a bit confusing on that function. Never the less, multi-track recording permits you to record each channel as a discreet track with individual settings for record levels, panning, volume and effects. The multi-track mixer enables you to accomplish some overdubbing, and you can apply some of the H4n's several audio effects to the tracks. However, you are not enabled to to do simultaneous 4-track recording because the on board microphones are configured for stereo and not discreet channels. A mono mix is an available option. Changes from either mode must be made when you have stopped recording so don't try switching while in record mode.

Back to that recording where I forgot to bring the windscreen; I found that handling noise was kept to a bare minimum though some wind gusts did make themselves heard from time to time. The H4n has its own internal compression and limiter settings and a massive milieu of additional functions, low cut filters, guitar amp and cabinet emulations and distortion and delay effects. I believe it will take a very long time before I learn all that it can do. It even has a guitar tuner function easily accessed through the menu button on the side which did a good job tuning up my Martin D-28.

Remember that nit pick I mentioned? Okay, here it is. The rubberized cover for the SD card slot is my only major peeve. It swings down if your fingernail is long enough to open it up, but I have a feeling that the cover itself is made cheaply enough that it won't last long with multiple accessing. If the cover weren't there or broke off, I don't believe that a problem would be caused or that dust might get in but for such a well built unit, a better quality cover is warranted.

The menu is easy to access. Using the scroll wheel brings you to the section
you want and a slight press in of the wheel allows you to adjust your settings.

The hard plastic case that the Zoom H4n came in is solid and appears to be well built though I am not totally confident that the hinges will last. Its like bending a piece of plastic this way and that; eventually the plastic breaks. We will see. I can't say I am overly fond of manuals either , and while very thorough, I did find many areas in it that did an excellent job of confusing me.

Those nitpicks aside, for the audio recordist, there is not a whole lot that the Zoom H4n cannot do. Yet, forgetting about all the bells and whistles that the H4n comes with, the bottom line is that the recording quality is excellent and worthy being used by any professional seeking good quality sound. Having recently acquired a Canon 7D, the Zoom H4n will be following me around the world as my own personal audio assistant.

Thanks to Royce Hildreth of Hildreth Media for his assistance.

Steve Douglas is a certified Apple Pro for Final Cut Pro 7 and underwater videographer. A winner of the 1999 Pacific Coast Underwater Film Competition, 2003 IVIE competition, 2004 Los Angeles Underwater Photographic competition, and the prestigious 2005 International Beneath the Sea Film Competition, where he also won the Stan Waterman Award for Excellence in Underwater Videography and 'Diver of the Year', Steve was a safety diver on the feature film "The Deep Blue Sea", contributed footage to the Seaworld Park's Atlantis production, and productions for National Geographic and the History channels. Steve was a feature writer for Asian Diver Magazine and is one of the founding organizers of the San Diego UnderSea Film Exhibition. He is available for both private and group seminars for Final Cut Pro and leads underwater filming expeditions and African safaris with upcoming excursions to the Cocos Islands, Costa Rica, and Hawaii. Feel free to contact him if you are interested in joining Steve on any of these exciting trips. www.worldfilmsandtravel.com