Aside from keeping our video Broadcast Safe, another reason for using the Vectorscope is because we can not objectively evaluate the colors of our video by eye. Every monitor is different, even calibrated monitors and everyone sees colors differently, many people even have some degree of color blindness (men more so than women), so we use the Vectorscope to objectively evaluate the video. Even the type of lights in the room with the monitor have an effect. While the Vectorscope is used to determine the color saturation of the video, it is also used to help color correct our video, which can have a color cast or tint to it. These color errors can happen because the camera was not 'white balanced', video was shot throughout the day, mixed light sources in the shot, or something as simple as the camera starting the shot facing South and then panning to North, where the color of the light is cooler, bluer. Different scenes or setups may need to be color corrected so that they can be intercut and have the colors match. One of the goals of color correcting is to have white objects (or light) that appear in the shot to be white or neutral in tone.

We also color grade our video to achieve an effect, a stylized look, warm the video up, cool the video down, give it a completely different look and feel. You don't think that the look of the feature film '300' was achieve only 'in camera'?

To properly color correct video for broadcast, we must have a professional broadcast monitor to evaluate our work, using the Canvas windows is not a good idea because it does not properly represent a broadcast signal. However, if you are preparing work for the internet, then you would want to judge the video on your computer monitor, because that's what the internet uses for delivery, a computer monitor. Regardless of your final destination, everyone has access to the FCP scopes, and at the very least, the scopes will keep you Broadcast Legal, and will also enable you to properly evaluate the color of your video for color correction and color grading. 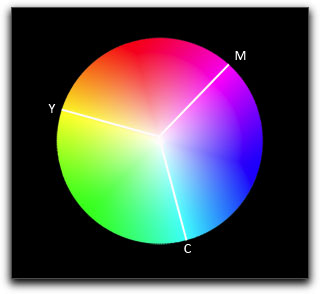 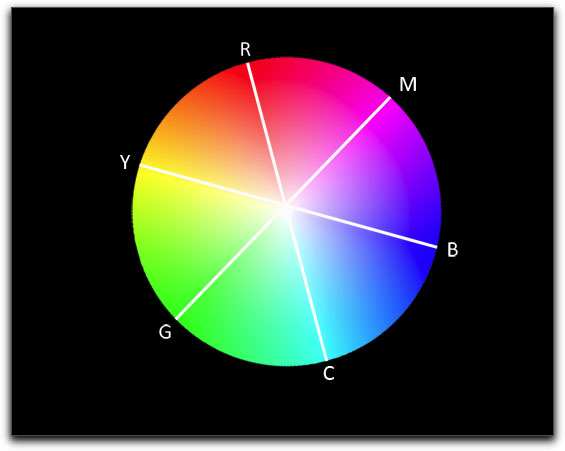 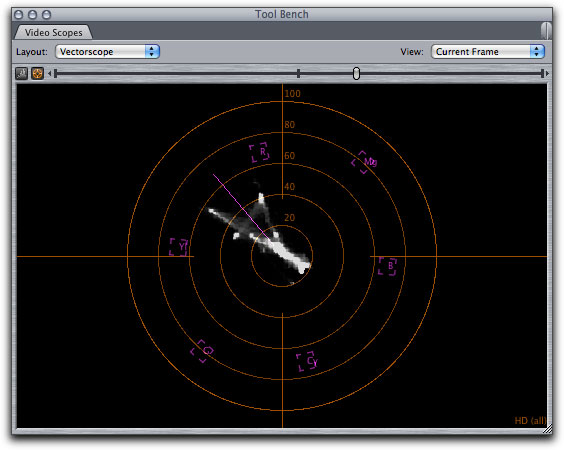 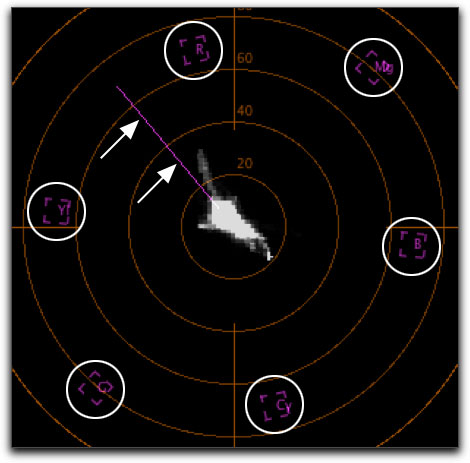 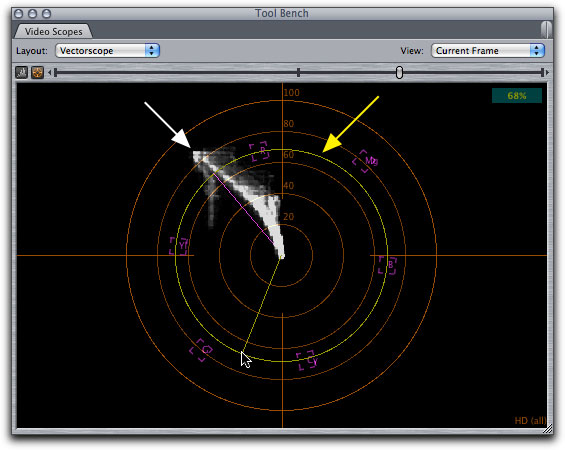 My next example, shown below, was shot late in the day during the Winter. The wall of the museum is shaded from any direct sunlight and is bathed in bluish Northern light, it has a very strong blue color cast to it. Reading the Vectorscope is fairly easy to do. If you look at the direction of the traces in the scope you'll see that they point between the color Cyan and the color Blue. Looking at the Canvas window we can see that, in fact, the colors do fall between Cyan and Blue. The other information that we derive from the Vectorscope is about color saturation. Looking at the scope we can see that the traces remain very close to the center of the scope, denoting very little color saturation.

As shown above, there are two main trace lines in the scope, the longer, more saturated of the traces (further away from the center), falls almost exactly between Cyan and Blue targets and the second, smaller, less saturated trace, points more towards Cyan target. Because my chosen example is very simplistic, comprised mostly of just two colors (two shades of blue), we can easily discover which trace line belongs to the museum wall and which trace to the lettering on the wall. After loading the clip into the Viewer window, click on the Motion tab and spin down the 'Crop' section. Now, crop all four sides so just that the lettering on the museum wall shows. The point here is that the scopes only read that part of the image that has not been cropped out, giving us the ability to select just one area of the image and analyze that one area in the scopes.

Below left is the Vectorscope before cropping, below right, after cropping the image in the Viewer, leaving mostly just the lettering on the museum wall. We can see in the Vectorscope on the right, that the longer more saturated trace is left. This makes sense because the color and saturation of the lettering looks stronger than the color of the museum wall. So the smaller, more Cyan trace is the wall itself. The color of the wall is less saturated than the lettering, so the trace that represents the wall does not extend out as far as the trace from the lettering. 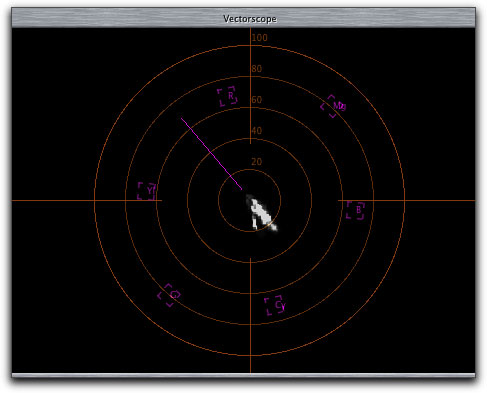 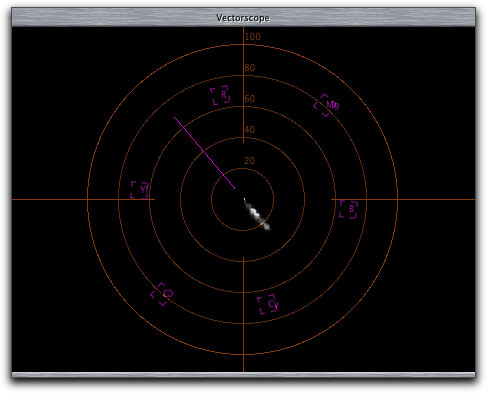 For my next example I have chosen a shot that is overly saturated. Looking at the Vectorscope, below right, we can see that the main trace is almost at the outer edge of the scope and well past the purple targets that mark the Broadcast Safe boundary. This video is not safe for broadcast and looking at the position of the trace in the scope, between Yellow and Red, we can tell that it is the orange part of the image that is too hot.

After loading the clip into the Viewer, I have cropped the image down and isolated part of the ride's car. You can clearly see the three colors in the video, yellow, red and blue, in the Vectorscope. Note that the red trace in the Vectorscope points directly towards the red target, this color is almost pure red.

In this same video clip there is a car from a different ride in the upper right portion of the video. When I crop for this car and look to the Vectorscope, the red trace for this car does not point directly to the red target, but rather it is shifted ever so slightly towards yellow producing a somewhat more orange red.

The point here is that we can not really judge the true value of colors or the amount of their saturation by eye, by looking at the computer monitor or even a calibrated broadcast monitor. Using the Vectorscope and employing the crop tool, we can get very accurate information about the color in our video and make accurate adjustments as necessary. 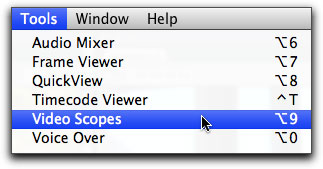 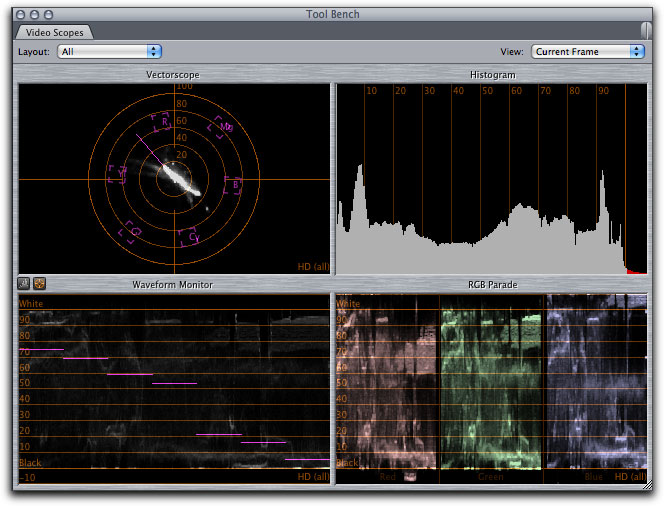 In the Video Scopes window, click on the 'Layout' drop-down menu and select Vectorscope. 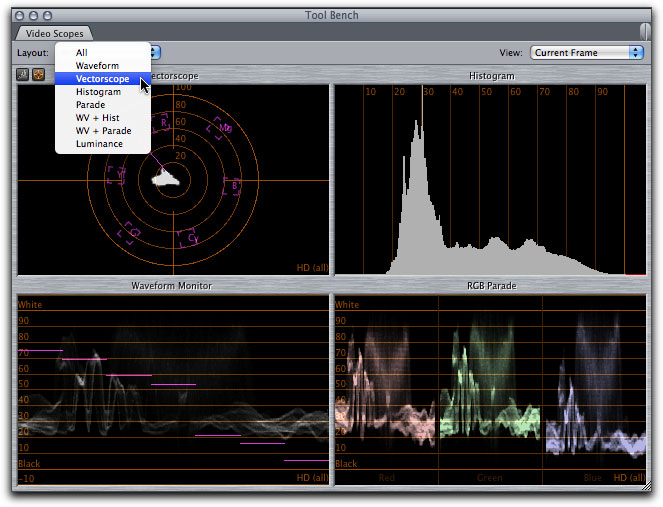 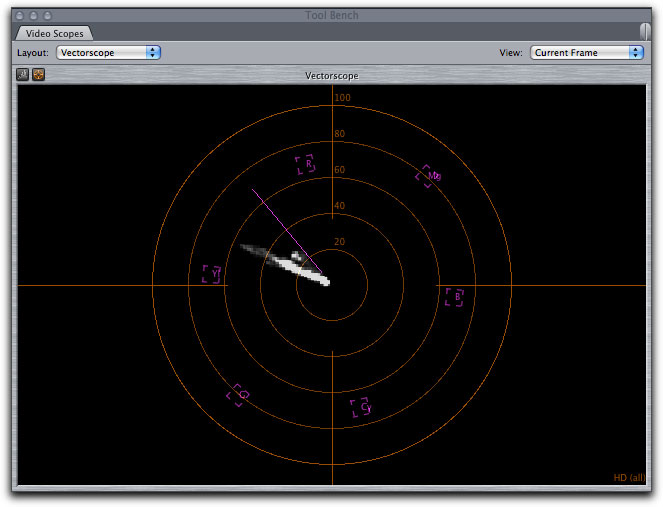 Sometimes, when I just need to work with a few clips, I'll drag the floating Waveform monitor window over on top of my Browser window. If I'm going to be doing a lot of work, then I go to; Window menu > Arrange > Color Correction.

In 'Button List' there are buttons for Color Correction screen layouts for both one and two monitor setups. I have added two buttons to my timeline, the single monitor Color Correcting layout (it has the number 2 in the button) and the 'Load window Layout' button (curved arrow) which I use when I want to return to my own FCP window layout.

The FCP Color Correcting window setup is shown below. The Viewer window is on the far left, and as I have not yet applied the 3-way color corrector to my clips, the filter tab is empty. The Canvas window is in the middle and the Vectorscope is on the right. Browser and Timeline are below.

Just beneath the Layout drop-down menu, in the Vectorscope window, are two small buttons. Clicking on the button on the left 'display brightness' turns on a slider that controls how bright the traces (the white pixels) appear. I like to turn my brightness up, makes judging the Vectorscope easier. 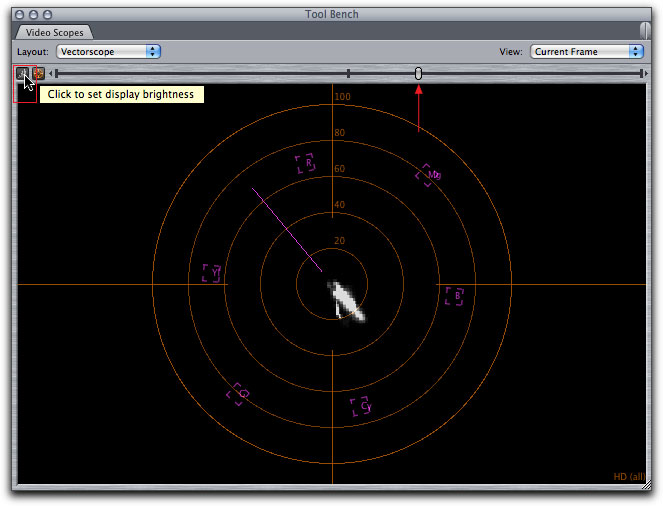 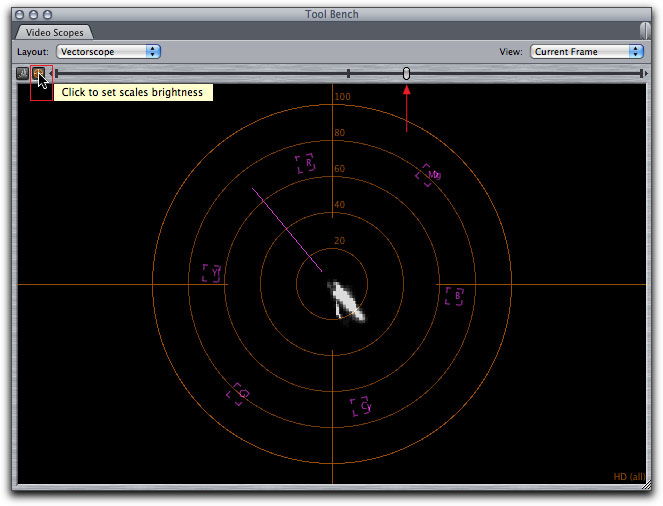 Upper right of the Vectorscope is the View drop-down window with a number of different options. I have this set to 'Current Frame', which uses the playhead in the timeline for frame selection. 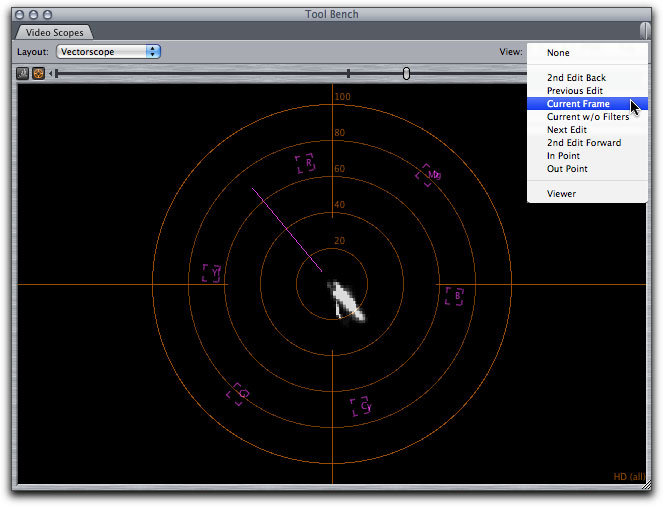 If you place your cursor into the Vectorscope, it generates a yellow circle that reads out the scale values of the position that you have placed the cursor. You can use this to ascertain the color saturation of any of the traces in the Vectorscope, these values are read out as percentages that show in the upper right hand corner of the scope. 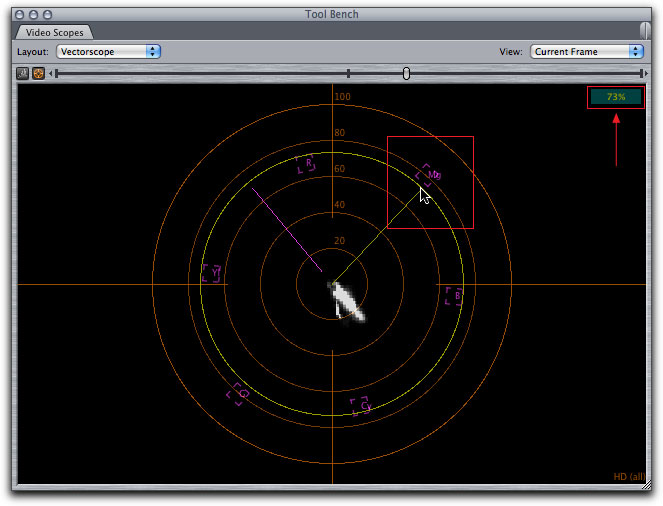 There is one last setting. In the timeline RT drop-down menu you must enable, 'Video Scopes Playback'. Additionally in the 'Scope Display' section, there are three options that control how the traces are displayed in the Vectorscope when you are not playing back, when your playhead is stationary. 'All Lines' analyzes all of the pixels on all of the video scan lines. This is a very comprehensive analysis and affords the most visual information for us to base our decisions on. This is the setting that I use. 'All Lines Except Top & Bottom', this option excludes the top and bottom 9 scan lines which are reserved for special signals like 'Closed Captioning' that might confuse the Vectorscope analysis if included. 'Limited Lines (fastest)', uses only 32 lines for evaluation, looking at the center portion of the video image. During RT playback there is only one display mode, which is the same as 'Limit Lines', because of the demands placed on the processor when running RT playback. 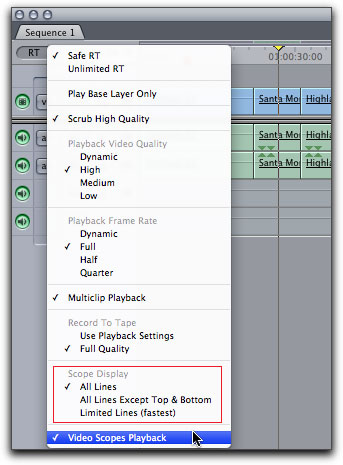 The Vectorscope, shown below left, during RT playback displays 'Limit Lines' mode, the only option. The very lower-right corner of the Waveform monitor indicates the scope display option that is selected in the RT drop-down menu, in this case (HD) 'All Lines'. Your choice of RT 'Safe' or 'Unlimited', below right, will depend on your processor speed and the video you are working with. 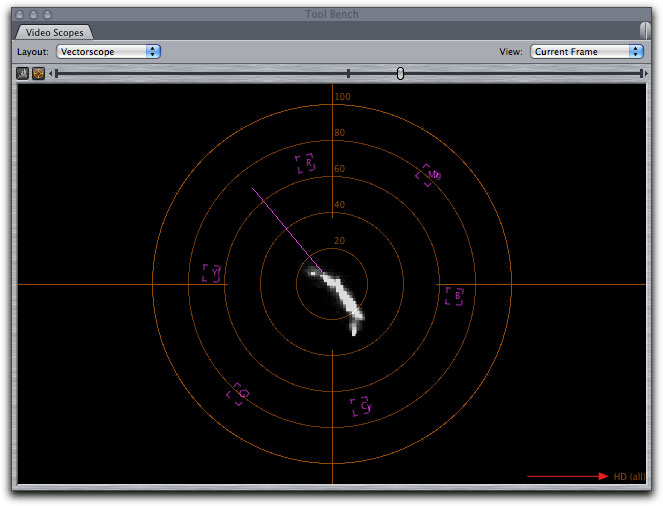 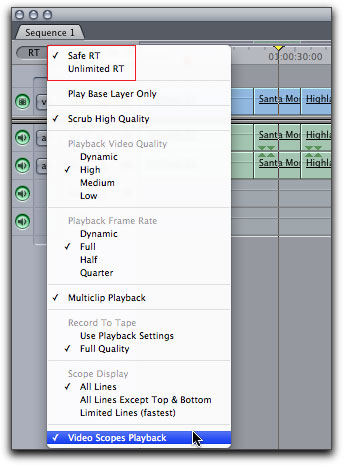 If you control (right click) anywhere inside the Vectorscope window you will get a pop-up menu. You can change the display from white to green, turn the purple Targets off and Magnify the center portion of the scope. Shown below, the traces are White and Targets are turned off. 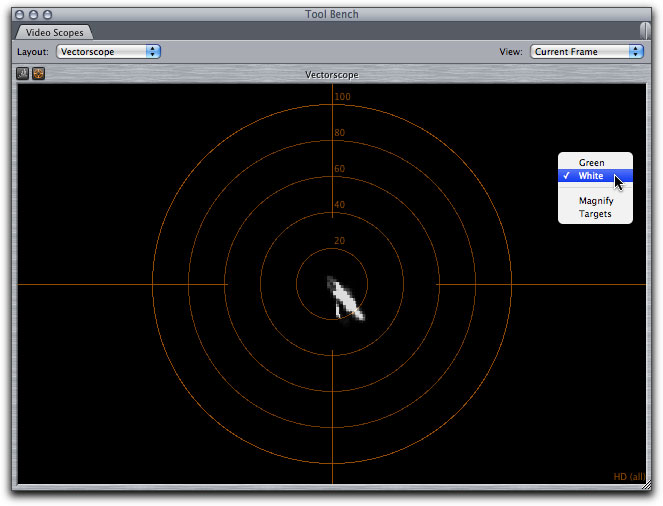 The Vectorscope shown below, green selected.Targets off. 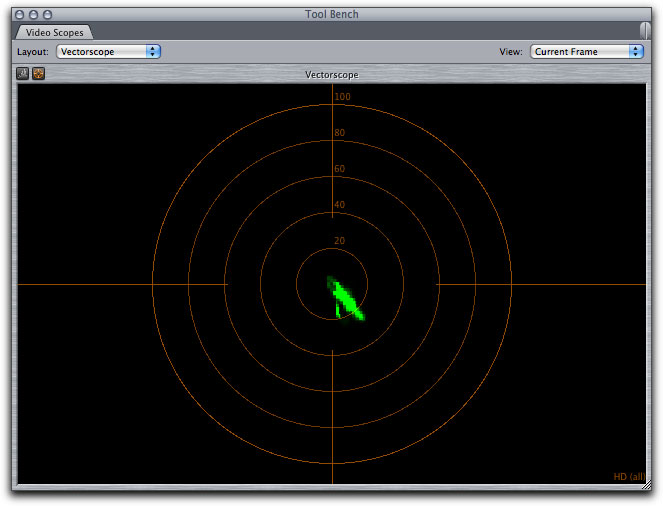 The Vectorscope with Magnification turned on. 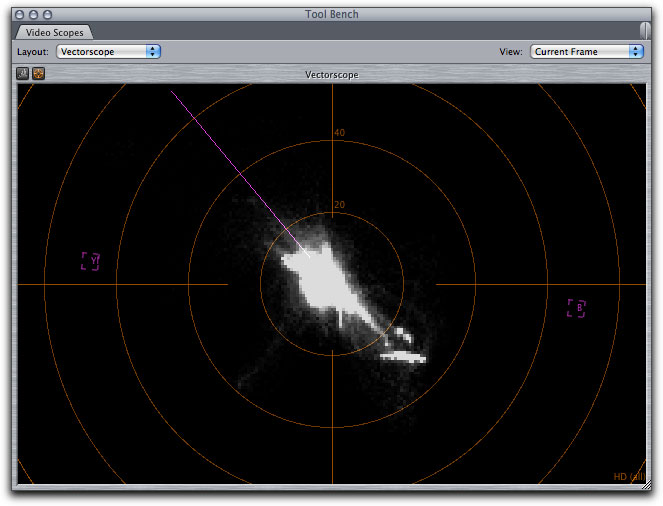