There's not an editor around who isn't somewhat familiar with the formidable power of Adobe After Effects. Over the years Adobe After Effects has become the industry standard for the creation of motion graphics and visual effects. Of course, as with many great applications, there is a price to pay and with After Effects the amount of time spent waiting for even preview renders could be costly to one's workflow and creative groove. Part of the problem, especially for those editors using multi-processor or mult-core computers is that the full power of the computer was not utilized to its full potential. That is where GridIron's new GridIron Nucleo Pro comes into play. Nucleo Pro is specifically designed to maximize CPU usage that results in both faster previews and renders. It has been designed strictly for this purpose for those on multi-processor computers and what a benefit you will reap when you see what it can do.

Installation was fairly simply and went without a hitch. Once installed and After Effects is opened, a window will pop up asking you for your serial number. This enables GridIron's Nucleo Pro to initialize and your home free. During the entire course of time I was experimenting with Nucleo Pro, I had but one crash and that was surely because I was running Final Cut Pro, Word, Grab and QuickTime at the same time. After Effects is pretty demanding of ram and my 2 gigs on a 2Ghz G5 was being taxed.

Utilizing Nucleo Pro's Fast Render or Fast Preview you will truly be surprised at the speed differences between using Nucleo Pro and After Effects alone. This is accomplished by adding six features to AE7. The first is by choosing either the Fast Preview or Fast Render options found under the Nucleo Pro Logo Icon in the top dock menu. While I am no technician, according to the folks at GridIron, additional CPUs may be significantly under utilized thereby preventing you from getting the speedy renders you thought your new computer would rip through. Both the Fast Preview and Fast Render features of Nucleo Pro divides the work ordinarily performed on a single processor by Adobe After Effects and allows it to run in parallel on multiple cores. This ensures that you are utilizing the power of your dual or quad processors when rendering with After Effects. Utilizing the Fast Render for a simple three layer, 10 second clip, my rendering for preview barely gave me time to fix myself a nice Dagwood sandwich. Darn, I used to be able to watch all of Survivor on the tube while waiting. No more. 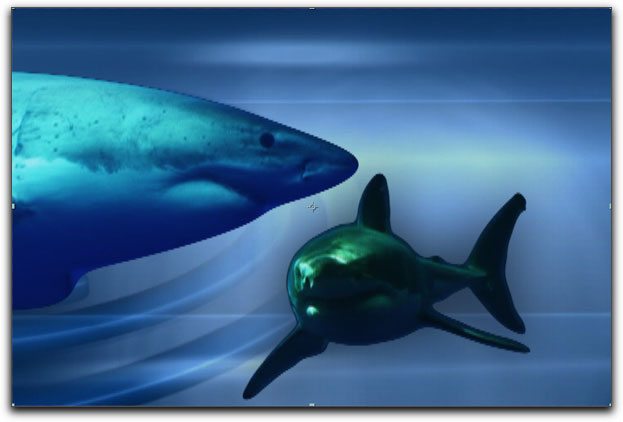 A simple 3 layer clip using a couple of matted sharks, one layer with the Magic Bullet Suite
and the background layer a plain animation. Never the less, rendering was surprisingly quick.

For more complex clips, multiple layers and animations are often the factor slowing things up. Digital Anarchy's Psunami reviewed here back in 2002 http://www.kenstone.net/fcp_homepage/review_psunami.html is an excellent plug in for After Effects or Final Cut Pro and I have used it many times. However, it does make demands on your editing system and rendering can seem to be an over night affair. Without utilizing GridIron's Nucleo Pro and going with a regular AfterEffects preview render, a 5 second clip of one of Psunami's many presets took 15 minutes. After changing just a couple of the parameters for elevation and pan and switching over to the Nucleo Pro Fast Render, the same clip took off one third of my render time and came in at exactly 10 minutes at high resolution. That's a pretty good reduction. 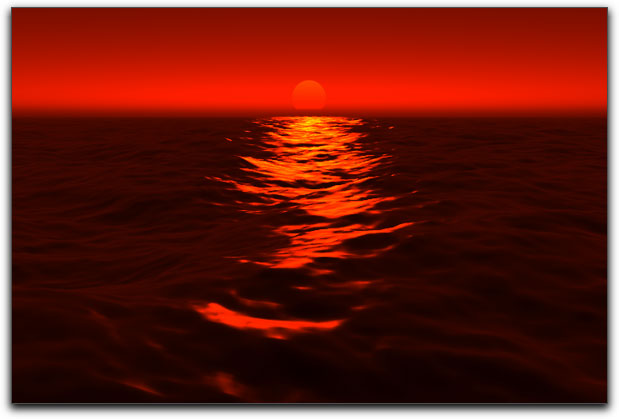 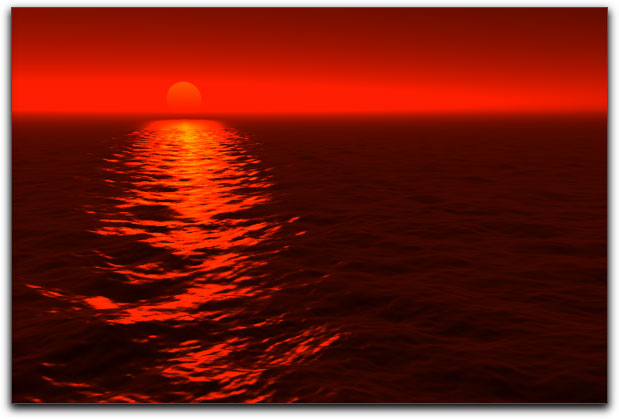 With only a couple of small parameter changes, Nucleo Pro's Fast Render took the race by a large margin. 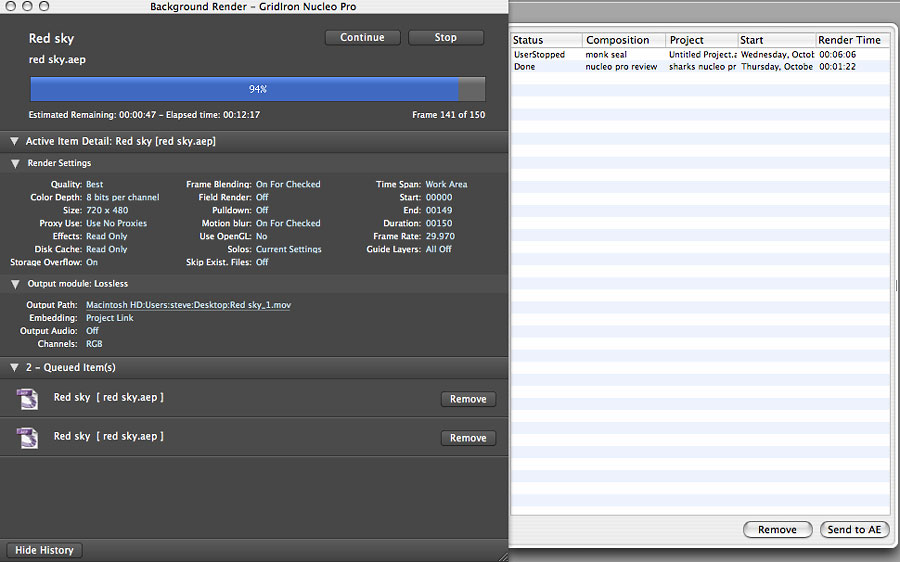 With the Nucleo Pro Background Render Queue work doesn't have to stop just because you have.

With the Spec-Preview enabled your composition will continuously and automatically render filling your After Effects Ram Cache. When you finish for the day and then re open the project, Nucleo Pro will automatically fill in the AE Ram Cache with the pre-rendered frames from your last session using the disk cached version of the frame enabling you to return to your project in the same state as when you closed it. No longer do you need to start the day's work with a long wait to get back to where you were. Any changes made to your composition will be detected and a re-rendering of any modified frames will be done.

Nucleo Pros Spec-Render allows you to continuously render your project as you are working on it. Spec-Render, instead of filling in the Ram Cache will render your composition to your final output format. Any changes made to the composition are automatically detected and, like Spec-Preview, modified frames are re-rendered. 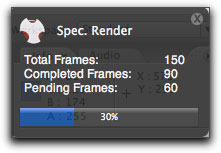 The Spec-Preview window lets me know just how much time my composition will take
and how much there is to be done. I found this to read quite accurately. 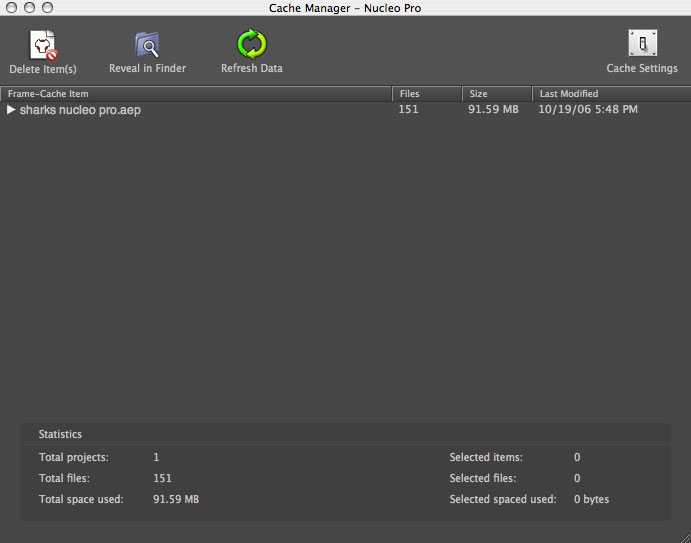 The Cache Manager is there to keep you abreast of just what you have stored and what you may want to easily delete.

While in the course of working with Nucleo Pro I did not utilize their Commit to Disk Feature but it is there for you. If you have layers that are complete but seem to cost you time when previewing, you may select and commit those layers to disk simply by selecting them and having Nucleo Pro render only those layers out in the background. When the render is done those layers are non-destructively replaced with the rendered footage item.

GridIron's Nucleo Pro is not just a simple plug in. It is an entire package and there is much to utilize, or not, depending upon your editing needs and workflow habits. As much as I used Nucleo Pro for this review, there remains much for me to learn about.

And how about tech support? The Nucleo Pro manual runs to 76 pages. I hate manuals but I found this one to be clear and concise, much better than so many others I have looked at. The GridIron website does its job by providing manual phobes like myself several tutorials for free downloading. This is what I think all software makers should provide on a regular basis to help the new purchaser get a running start in the use of their software.

Bottom line, while not entirely inexpensive, for the regular user of Adobe After Effects 7, GridIron's Nucleo Pro will certainly pay for itself in time saved, and probably on that first project. Clients will be pleased not having their patience tested as they wait to see the changes they requested. You, the editor, will be duly impressed with how easy Nucleo Pro is used and wonder as to why this wasn't available years ago.

Steve Douglas is an underwater videographer and contributor to numerous film festivals around the world. A winner of the 1999 Pacific Coast Underwater Film Competition, 2003 IVIE competition, 2004 Los Angeles Underwater Photographic competition, and the prestigious 2005 International Beneath the Sea Film Competition, Steve has also worked on the feature film "The Deep Blue Sea", contributed footage to the Seaworld Park's Atlantis production, as well as for recent History channel shows and is one of the principal organizers of the San Diego UnderSea Film Exhibition. Steve leads both underwater filming expeditions and African safaris with upcoming filming excursions to Kenya, Bali & Komodo in 2007, and Costa Rica and Palau in 2008. Feel free to contact him if you are interested in joining Steve on any of these trips. www.worldfilmsandtravel.com