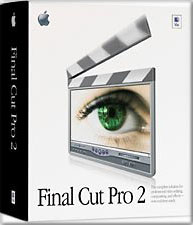 Last week Apple announced their long awaited, long anticipated update to Final Cut Pro after a prolonged period of development. Throughout this period the only 'inside information' that anyone could get from Apple was enigmatic answers like "We've heard that users would like that and it's been a priority with us". Just two weeks ago at the Motion Picture Editors Guild meeting Randy Ubillos, lead architect for Final Cut Pro, was continuing to give nothing away.

Now that we know what is included it's reasonable to ask ""Was Apple listening and have they given users what they've been asking for?" From my perspective, the top requests were:

Of course, there were other requests as well, but those 8 items would be at the top of most lists. I had a few personal preferences that I'd have like ­ color labels, the ability to set my own poster frame and snapping indicator, filling out my personal Top 10.

So how has the Final Cut Pro team done? Very, very well! Final Cut Pro 2 delivers almost everything that was asked of it, and on the top 8 items I listed, the development team ranks a High Distinction or two thu

mbs up! I even got my three personal wishes included.

Building Final Cut Pro 2 on top of this new QuickTime functionality was the first step to delivering real time in Final Cut Pro. However, real time done completely in software by the CPU is still a little distance in the future, and the second element that was required for real time was support from hardware manufacturers, because real time means hardware.

Announced last year at the National Association of Broadcasters show in Las Vegas, Apple partnered with Matrox to make Matrox's RT2000 hardware compatible with Final Cut Pro's real time architecture and call it RT-Mac. The RT-Mac is the first DV codec solution for real time with Final Cut Pro 2 and provides the 'most of what you want' feature set. Most importantly, RT-Mac doesn't do real time to DV.

What the RT-Mac does do is to provide real time capture of DV from tape (as does Final Cut Pro by itself) as well as digitizing analog video into DV in real time. RT-Mac provides real time analog preview to an analog monitor from the RT-Mac breakout box of:

All effects preview to an analog NTSC or PAL monitor in real time with full video quality, which is where most of the experimental work is done. The analog preview could also be used for preview to VHS dubs or mastering to an analog format like BetaSP. For a final print back to DV/DVCAM the effects have to be rendered.
See Faster Rendering all round

The most significant implication of real time in Final Cut Pro 2 is not just RT-Mac although it will probably be the most common because of the bundling arrangements with Apple. Most significant is that the new real time architecture is open to any hardware manufacturer who wants to implement it. Promax has long promised that their RT-Max card will work dual stream with Final Cut Pro 2 as soon as they have access to the Application Programming Interface (API). This has recently be confirmed. RT-Max uses another Matrox card along with some Promax developed hardware to deliver real time DV and real time color correction in addition to the features of RT-Mac. Not being part of the arrangements between Apple and Matrox, Promax will ship RT-Max some time after NAB.

Outside the DV sphere there are two products that will excite the higher end producer/editor. Pinnacle's CinéWave has been working with Final Cut Pro with uncompressed video and HDTV while it's PC stable mate, built on essentially the same hardware, the Targa 3000 is working with multiple uncompressed video streams and dual graphics tracks. With Final Cut Pro 2 the CinéWave is expected to do 3 streams of uncompressed video with real time transition and motion tab settings plus two tracks of animated graphics. Working in 8bits per channel or 16 bits per channel in it's final configuration, the CinéWave will be the powerhouse for real time video.

The other exciting development, first reported on DV Guys in our first 'Views of the News' segment, is that the Digital Voodoo 128 bit card will do real time effects with 10 bit uncompressed video (essentially the same as Digital Betacam) and also HDTV. Details on the Digital Voodoo offering are a little sparse and we'll have to wait until NAB for the full story, but the availability of two high end solutions is a good thing and will spur both into further development.

For many people, Final Cut Pro 2 will be about real time. I see a whole lot more that will improve my productivity, but if you've got a client sitting over your shoulder, real time is the only way to go.

back to table of contents

From a support perspective, one of the difficulties with a flexible software product like Final Cut Pro is that it is difficult to configure. Many new users have problems understanding the need to match settings between what the camera used, Capture Settings in FCP, Device Control settings and Sequence settings. This is compounded by the fact that settings have to be established when the user is new to Final Cut Pro and least familiar with the controls and concepts.
Final Cut Pro 2 should see the traffic in support forums and the questions at the start of User Group meetings drop dramatically as every settings dialog has been revamped and simplified.

In fact, for most users, choosing settings will be mean making a selection upon install, or choosing a single Easy Setup option from the Easy Setup dialog. Easy Setup sets Capture Setting, Device control, Default Sequence setting and Video Output with one selection from a dialog. 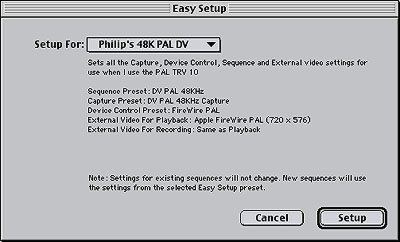 Easy Setup signifies some pretty deep changes to Final Cut Pro and the way settings are managed. Each of the settings dialogs are changed and simplified. All the control that was there in Final Cut Pro 1.x is still present but most people will never need to see the details because Easy Setups are independent files that can be traded among users or shipped with hardware.

For example, Digital Voodoo could ship two Easy Setup files with the Digital Voodoo 128 card and users would only need select 'Digital Voodoo Standard Definition' to set Capture, Device control, video output and Sequence settings for real time standard uncompressed, or choose an Easy Setup setting for "HDTV" which would change all settings to match the HDTV requirements and codecs.

But, should you want to create your own, making an Easy Setup setting takes no more time than to set the options you want in the new, simplified settings dialogs. Then in the new Audio & Video settings master dialog, view the summary and click on the Create Easy Setup button. 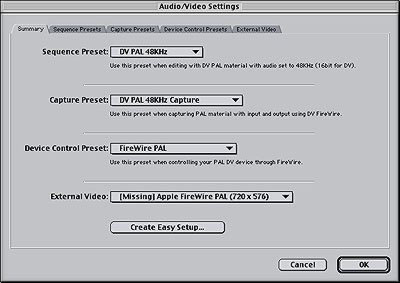 Name the setting and enter a description so you know what it will be used for, and the file is saved. Support personnel could email Easy Settings to clients with problems, or users could exchange their own settings files for obscure hardware. 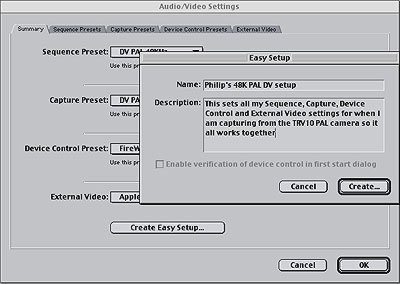 As I said, each dialog has been simplified, with most selections being made from a simple pop-up menu without needing to dig down into QuickTime settings, although all settings remain accessible for the few who want or need to get to them. In the Capture settings or Sequence Preset Editor, clicking on the Advanced button opens up the somewhat confusing dialogs previously required. 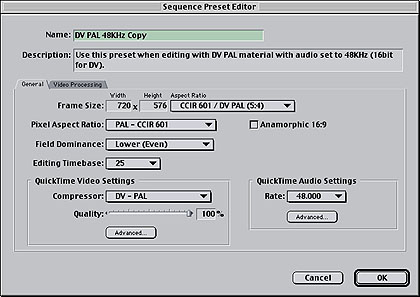 Every Settings dialog now creates named presets, and those presets can be chosen, wherever they are needed, by simply selecting them from a dialog. For example in the Capture Settings tab of the Log and Capture window, Device control and Capture settings are chosen from pop-up menus, instead of needing to go to the actual preset editor. 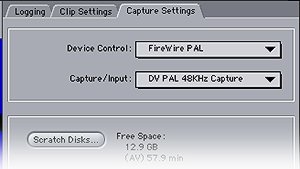 Mismatched media settings need never be a problem again. Apple ships Final Cut Pro 2 with the most common settings for DV in PAL and NTSC for 32 and 48 Khz with standard 4:3 or 16:9 aspect ratio. Matrox RT-Mac settings are included for RT-Mac owners and I expect each manufacturer will ship their own settings if they are not among the settings included in the 3rd Party Hardware settings folder (which has Miro DC30, Aurora Igniter and Targa Easy Setup files provided for NTSC and PAL).

back to table of contents